Nacho Vigalondo Teams up with Robert Kirkman for Next Feature

Timecrimes and Colossal director, Nacho Vigalondo, is teaming up with The Walking Dead Creator, Robert Kirkman, for an adaptation of Comeback. THR reports the collaboration that will bring Ed Brisson’s 2013 comic to life. 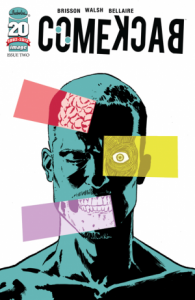 In what sounds like a story that is perfect for the time-travel feature expert – Timecrimes is just brilliant – The Comeback follows a company called Reconnect that will rescue loved ones by going back in time. All for a price, of course. However, a mission goes wrong and leads to a man meeting the future version of himself. The both of them soon find themselves on the run from their employers and the FBI.

Vigalondo will write and direct Comeback, while Kirkman produces via Skybound Entertainment. Nahikari Ipina, David Alpert, Sean Furst and Bryan Furst will also work on the project as producers.