An eerie and mysterious new trailer has been unleashed for Netflix’s supernatural spooker The Open House and it shows Don’t Breathe’s Dylan Minnette investigating creepy goings-on in a vacant holiday home.

The trailer boats many creepy moments and a chilling atmosphere that works wonderfully with the trailer’s choice of track, All You Leave Behind from Hannah Cartwright. There are a few generic moments and we fear that the eventual reveal may not knock our socks off, but he do hope The Open House delivers the shocks and scares the trailer teases. 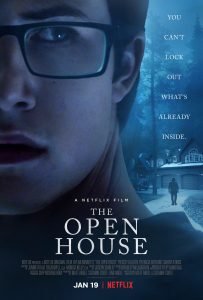 Synopsis:
A teenager (Minnette) and his mother (Piercey Dalton) find themselves besieged by threatening forces when they move into a new house.

The Open House additionally stars Sharif Atkins, Patricia Bethune and Matt Angel. You can catch the film when it streams on Netflix from 19th January 2017.