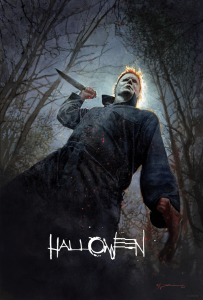 Universal brought pandemonium to prestigious Hall H at San Diego Comic-Con on Friday, delivering a 1-2 combination that began with a trailer for Glass and ended in Haddonfield with never-before-seen footage from Blumhouse’s Halloween. Set to hit US theatres on October 19th, Halloween’s release is timed to coincide with the 40th Anniversary of John Carpenter’s original Halloween, often credited as the spark that ignited the slasher craze of the 1980s.

Proving rumours of major retcon are completely accurate, descriptions of the footage describe a return to form for Michael Myers, aka “The Shape”. No longer ruled by a desire to merely pulverise his siblings, Myers is an indiscriminate killing machine, an inhuman psychopath determined to eviscerate anyone who crosses his path. The Shape goes from one random domicile to another, crushing one woman’s skull with a hammer before putting a kitchen knife completely through the throat of another.

The enthusiastic crowd was also treated to an extended trailer, one we can only hope will hit the Internet this weekend. In the meantime, check out the previously-released trailer and synopsis for Blumhouse’s Halloween below.