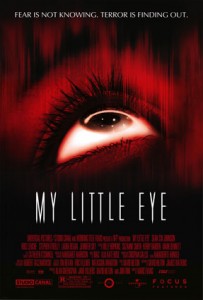 Five participants in a reality TV webcast are tasked to spend six months under constant surveillance in a country house for $1 million each. If one of them leaves, they all lose. But after months of serenity, the participants’ stay suddenly turns more terrifying, as the organisers do their utmost to make them leave the property and forsake the fortune.

During the noughties, a short spate of horror films surfaced, capitalising on the Reality TV trend that evolved from Big Brother, and its mostly repugnant imitators. The themes of isolation, voyeurism and public-monitoring proved perfect for the genre and so the likes of Series 7: The Contenders, Wrong Turn 2: Dead End, Slashers and the excellent series Dead Set were spawned, along with this low-fi surveillance horror from Welsh director Marc Evans.

In recent years, the internet and computer technology, have been used as tools to torment in tales of terror such as: Chatroom, Pulse and Feardotcom. More recently Unfriended, Open Windows and the upcoming Ratter, have all utilised the net and its associated software for the benefit of scaring us senseless. But what makes My Little Eye unique, (even more so now, in retrospect) is that, not only was it one of a surprisingly few films to capitalise on the reality TV trend, which has since partially evolved into gaudy/ awful primetime talent shows, but it represented a major moment of technological transition, as productions typically mooted for television, were suddenly appearing online.

This makes My Little Eye a noteworthy precursor to a great swathe of tech/ social media themed horror films that followed in its wake and are suddenly in much greater abundance than many people realise, especially when compared to the initial, aforementioned few that evolved from reality television. 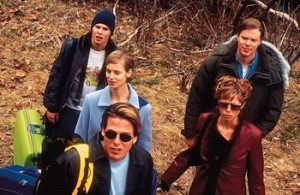 Tech-horror has now become a fully fledged subgenre that has silently evolved since the 70s with the likes of Demon Seed. The first film to portray the medium/ device as a malevolent force arrived in 1953 in the form of satirical horror The Twonky. Later Poltergeist, Videodrome, Terrorvision, The Video Dead, Ringu and numerous others surfaced as TV became a more common household appliance, with each film providing a fascinating insight into the technology of the time. The tech-horror subgenre is almost now similar in size and style to the found-footage horrors that began with Cannibal Holocaust in 1980 but never really blossomed into relevance until The Blair Witch Project in 1999.

My Little Eye is revolutionary to a degree and has a curious central concept but the film is far from a masterpiece. Director Marc Evans (Trauma, Resurrection Man) coaxes mostly naturalistic, suitably understated performances from his cast, which are fitting to the context while grainy footage contributes to a heightened sense of realism, augmented by the reticent acting and complex characters. The story is told entirely through security cameras dotted around the house, placing the viewer in the POV of one of the show’s subscribers: a similar story-telling device recently adopted in Open Windows, Unfriended and Ratter, even though phone cameras and webcams were used in those cases.

My Little Eye is slightly restricted by its own self-imposed technological limitations which permit the story from evolving beyond the realm of its setting and places the viewer in the position of a passive observer, scrutinising the “live” feed from a hypothetical safety zone, which subsequently mutes the element of fear. Abstract music, similar to that of Wayne Bell and Tobe Hooper’s discombobulating score from The Texas Chainsaw Massacre, contributes to a saturating unease and sense of disconcertment that is prominent throughout. This also serves as a key characteristic/ driving force for the horror, along with the coarse imagery through which the drama unfurls.

The set up is immediate: we are introduced to the concept and characters via a simple computer screen followed by the audition tapes of the participants, before being hurled into the house at a stage where the clan are already acquainted, just as their nightmare is about the begin. But the viewer isn’t au fait with the characters at the level required to generate empathy. The opening video intros are synthetic, like meeting someone online for the first time instead of in person, which is ironic, and partly prophetic as My Little Eye is the product of a pre-facebook age. But delivery aside, the characters are for the most part unique and enriched with complexes. They also, all share an almost equal amount of screen time, until a protagonist emerges in the latter half. 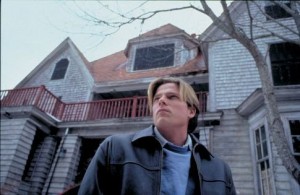 My Little Eye works best when crawling under our skin and subtly disturbing instead of jolting the viewer with artificial boo jumps, most of which are a little contrived. Finger scrawled messages in the dirt on the bathroom window, ominous packages and the arrival of a mysterious stranger (played by a pre-hungover Bradley Cooper) are all intriguing facets that combine to make My Little Eye function efficiently. Sinister night vision scenes in lurid neon green where characters appear other-worldly and their eyes shine piercing white, go some way to unsettling, while grubby camerawork and distorted sound design enforce the air of an 80s video nasty or a 70s home invasion flick.

Ironically now, we live in an age where horror themed reality TV shows have haunted our airways en masse with the likes of Paranormal Witness, The Haunted and Killer Contact previously populating late night viewing slots but My Little Eye was one of the first and few fictional horror films about reality television. The story is slight and the twists unsurprising while the lack of an established protagonist from the outset makes it hard for the viewer to totally invest, but many commendable elements make My Little Eye more than a simple victim of its misgivings. It’s an often tense and enjoyable thriller that works as a tech- horror, a Reality TV related spin-off, a product of its time, a psycho slasher flick and a novelty, hybrid/ construct of all of the above.