A film adaptation of Grady Hendrix’s 2016 horror novel My Best Friend’s Exorcism is currently in the works from Endeavor Content.

The novel, which is set during the 1980s and described as “Beaches meets The Exorcist,” focuses on the friendship between Abby and Gretchen, two best friends and high school sophomores. After an evening of skinny-dipping goes wrong, their friendship is tested as Gretchen begins to act… odd. Upon investigation, Abby begins to suspect that her bestie may in fact be possessed by a demonic force. 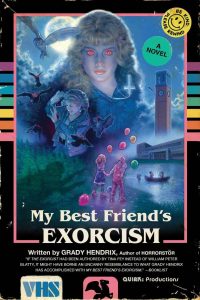 Elsie Fisher (Castle Rock) will star as Abby in the film adaptation, with Amiah Miller (War for the Planet of the Apes) playing Gretchen. The cast also includes Cathy Ang and Rachel Ogechi Kanu.

Damion Thomas (Penny Dreadful) is on board to direct, from a script by Jenna Lamia, who is also an associate producer. Christopher Landon (Happy Death Day) will produce.

Production is currently underway on the project, so we’ll keep our eyes peeled for more news to share with you!