MVD Entertainment has acquired the rights to the sci-fi thriller Subterranea from director Mathew Miller, who is making his feature debut with the project. The film is based on the concept album with the same name from the band IQ which was released in 1997. 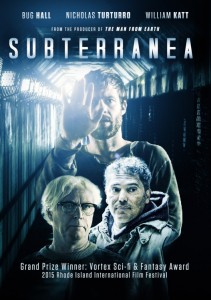 Synopsis:
Subterranea stars Bug Hall as “The Captive”, who was locked in a dark cell as a small child and was raised in complete isolation, never seeing daylight or even another human being. Over twenty years later, without warning, he is released into society with nothing but the clothes on his back. Determined to find out who he is, The Captive discovers that he’s the centerpiece of a dangerous orchestrated sociological experiment and sets off to find the truth about his shadowed existence, ultimately leading to a thrilling confrontation with his maker, “The Provider” (William Katt).

You can watch the trailer for Subterranea below, which looks particularly enchanting and bold, boasting the film’s fascinating concept and beautiful visual style. The film will be released on VOD, DVD and Blu-ray on 13th September 2016.