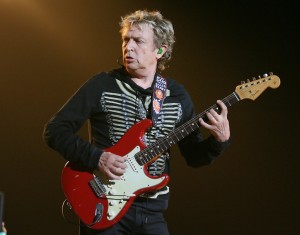 Musician Andy Summers from the band The Police has been cast in the J-Horror flick The Temple from Scott Spiegel (Intruder, Hostel III). The supernatural horror is set to be filmed in Bhutan and will be the first Western film to do so. The story will follow a policewoman investigating a robbery in a temple, but is met by an American TV crew and cautious locals. A series of sinister happenings suggest that the demonic Goddess from within the temple is after what has been stolen.

Horror films with a documentary crew at the core are typically met with a groan; recent films like The Pyramid show that the found-footage aesthetic doesn’t always work within a claustrophobic setting such as this. Nonetheless, As Above So Below – which had a very similar narrative and style as The Pyramid – was an above average endeavour with plenty of frights and originality. Hopefully The Temple will sway towards this side of the spectrum and we won’t be met with another unrefreshing and fright-less feature.