Murder is Romantic in the Trailer for Capture Kill Release

Capture Kill Release can only be described as a romantic slasher, because it follows a couple who seek to kill purely to see what it’s like. The film comes from co-directors Nick McAnulty and Brian Allan Stewart, who together directed Uncle Brian, which is another dark feature and follows a teenager who disregards his responsibilities. 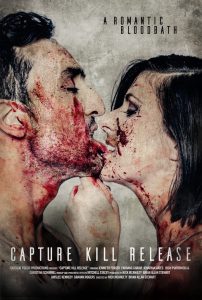 Synopsis:
A couple plots to murder a random stranger just for the thrill of it, but things turn ugly when one of them decides not to go through with it.

It’s a disturbing concept and the trailer – which you can watch below – is equally as unsettling, mainly because of its handheld camera aesthetic. I always find animal deaths hard to deal with in films and it looks as though the cat in Capture Kill Release has hell waiting for it. Sigh.

Capture Kill Release has done well on the festival circuit and won the prize for Best Horror Feature at the 16th Annual Shriekfest in Los Angeles. It looks like it’s going to be a difficult watch, but we can’t help but be attracted to its uncomfortable comedy and overwhelming darkness.