Synopsis:
After narrowly escaping an ancient burial ground, a group of friends find themselves trapped between two evils, forcing them to fight, die, or go back the way they came.

There’s no denying that titillation is a prominent factor in many a horror movie, both old and new. Most times eroticism is used to inject a healthy dose of humour, such as the unforgettable evil raping vines in The Evil Dead, whilst other times it serves as a pivotal plot device, such as Dawn O’Keefe’s bad case of vagina dentata in Teeth. Steve Wolsh’s camera certainly has a habit of veering towards nipples, navels and knickers and most of the smut does little to forward the plot but it doesn’t really do the film any disservice and gratuitous nudity is always going to be a great selling point, particularly when it comes to horror movies. The first-time writer/director is clearly aware of this fact and shows no qualms in letting the viewer know exactly what’s in store; pretty much the entire opening sequence consists of a young damsel wobbling her woman parts around in the wetlands. That said, despite an overdose of erotica, when the cast meet their comeuppance flashes of Wolsh’s prowess shine through with some particularly impressive gore and action sequences.

There’s clear passion for the genre and Muck is a soberly solid throwback to camp slashers of the ‘80s with hyperbolic one-liners, grisly practical effects and lavish nudity out in New England’s wetlands. As gorgeous as all the girls are, it’s Wolsh’s reliance on practical effects and death defying stunts that aroused me so much more; the Screen Actors Guild even cited Muck as one of the 5 most dangerous scripts they had ever come across. Not only was some of this stuff clearly dangerous but it was also pretty deftly shot; a standout moment being a butt naked protagonist slung through a window. The film goes on to provide full body burns, impalements and full on choreographed combat and in the end it’s not entirely about defenceless thonged-up women maundering around the marshes.

Kudos also to composers Dan Marschak and Miles Senzaki who orchestrated a pretty unique score by giving each character their own distinctive soundtrack; not something you come across every day, particularly in a horror movie.

Despite a couple of irksome cast members, particularly Lachlan Buchanan and a “chip off the old Jeremy Kennedy block” provided by Grant Alan Ouzts, most players put in adequate performances and clearly had fun in the process. Bryce Draper, who recently starred in The Asylum’s take on Fifty Shades of Grey, Bound, has his moments and then Laura Jacobs had something special going on and I’d like to see more of her in the future. Jaclyn Swedberg is drop dead gorgeous of course but her role doesn’t really add a whole lot of substance to the film as a whole. As per usual, Kane Hodder puts in a terrifying performance as Grawesome Crutal and the creature makeup is reasonably effective but it’s the brutally executed gore and brutality that demands to be seen.

Weighing up the goods, Muck may take its homage to immoderately erotic extremes but, as long as you take the film at face value and are willing to get down and dirty with it, it’s a flawed yet somewhat impressive debut. Many genre classics earned themselves their cult followings thanks to their ingenious kills and hammed up scripts and whilst I’m not entirely convinced Muck will reap the same kind of benefits, if Wolsh focuses his lens more on his well executed kills and action scenes and a little less on naked scream queens there just may be a reasonably bright future there for the taking. 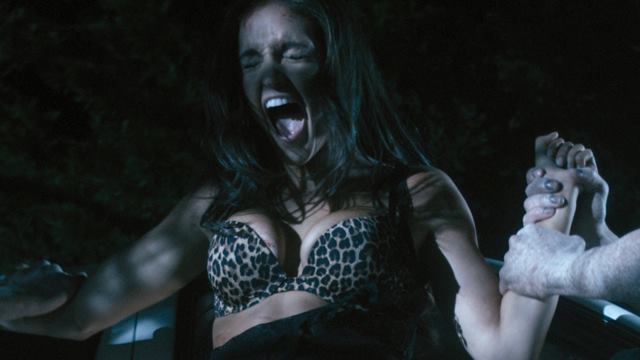