So I have only read one other thing by MrDaniel Marc Chant and that was his short story Conductive Salts which appeared in the anthology The Black Room Manuscripts, again from The Sinister Horror Company.

I didn’t dislike the short story. I was half and half and rated it bang in the middle because I wasn’t sure about it. This review is what I like to call a “challenge” review. This is as a result of an email from Mr Chant saying something along the lines of “sorry you didn’t like the other one but try this one”. I love “challenge” reviews because I have nothing but respect for an author who comes to me, after what they would probably call a negative review, and says “try this”. I say phooey to all this “never interact with a reviewer if you get a negative review”. Some of us actually like it. If it’s done in the right way like this.

*Disclaimer* – just because Mr Chant had the balls to do that doesn’t garner any favours in the review. However… 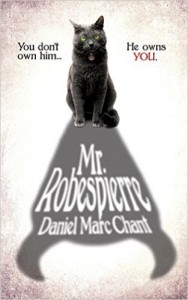 Dom is moving into his new house in the country with his beautiful wife Sandy and their eight year old daughter Chrissie. It is a huge house that they got at an amazing price. What a change from the council estate they were living on.

The day they move in, Chrissie is mesmerized by a cat they find in the back garden. It has a name tag reading “Mr Robespierre”. Dom and Sandy are wary of letting Chrissie keep it in case someone is missing it. They come to an arrangement and he can stay at the minute, as long as no one claims him.

Not long after he is allowed to stay, strange things start to happen in the house. Things that get stranger and stranger as time goes on until they reach horrific proportions for all the family.

No one has any idea what is happening. But Dom has been keeping a secret. A secret that could lead to disaster for everyone.

Characters – loved them. All of them. Dom is a husband and father just out to do his best for his family. Sandy is the loving wife and little Chrissie is adorable. They seem the perfect family. Dom has kept a secret though about how he got the house so cheaply. It wouldn’t change things now but they maybe wouldn’t have bought it and been in this pickle if everyone had known about it. We meet a few other characters later in the book but I can’t tell you anything about them without giving away some of the plot, other than the fact that they all play their part very effectively and fit into the story perfectly.

There is one other character in the story though. Mr Robespierre. How do you write about how a cat was as a character? Hmmm….well….now don’t shoot me but I don’t like cats. If I did like cats, I wouldn’t after reading this. This little frolicking feline gave me the shits. It creeped the hell out of me purely by the way Mr Chant describes its attitude and its actions. Horrible thing. It would never have got in my house!

So what was the plot I hear you ask! Think any 80’s horror flick about things going bump in the house. Think Poltergeist for one, although to be honest this struck me more as more an Amityville Horror than anything else.

You get the picture? It’s not an original plot so therefore you would think it would be same old same old? Wrong! That’s what I expected but not what I got. What I did get was a beautifully creepy short story that gave me goose bumps more than once. It had me reading with one eye closed more than once. It had me holding my breath more than once. My dog was lying on my lap sleeping and barked in his sleep at one nasty part and he went flying across the room because I jumped so much. That is the sort of story we are talking about here.

Daniel Chant has written something here that you must read to get the full effect of it. It’s not perfect in the way it is written. There are a couple of flaws and once or twice I did think maybe some of the phrasing and grammar could have been polished a bit more but this is a young man still learning his trade. The story is so strong though you will overlook that. Like I said, it is not an original plot and I get the impression that it was intended to be a bit tongue in cheek but I cannot deny the fact that this is an extremely well written book that will creep the hell out of you. It has things that go bump in the night. It has nightmares for all the family. It has death. It has that bloody cat. It has everything it needs to be an effective, scary story. It also has a couple of surprises later in the story that I didn’t see coming. Some bits I thought I had predicted but it appears I was wrong.

To summarise: A homage to 80’s horror. An extremely well written, very creepy story that will not only scare you but will make you sit back afterwards and think “that was bloody good fun!” It’s so much fun it makes you gloss over the one or two flaws. Great stuff.