IN THE MOUTH OF MADNESS: Film Review

Synopsis:
Insurance investigator John Trent (Sam Neill) is hired by Arcane Publishing to track down renowned horror writer Sutter Cane (Jurgen Prochnow), who mysteriously vanished before submitting his latest manuscript. Cane’s departure coincides with an outbreak of public hysteria surrounding his most recent novel so Trent sets out to prove his disappearance is nothing more than a publicity stunt. 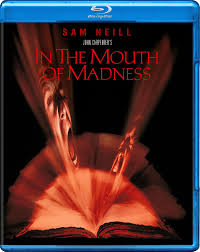 This criminally underrated John Carpenter curio from 1994 is the final instalment in his “Apocalypse Trilogy” (preceded by The Thing and Prince of Darkness). It is also one of the director’s most courageous, creative and radical works. Tapping into the literary pop horror phenomena of the 80s and 90s, spawned by the likes of Dean Koontz, Richard Laymon, Shaun Hutson and Stephen King, Carpenter crafts a vibrant, mind-pounding, Lovecraftian phantasm from Michael De Luca’s screenplay. Hurling axe-hacking blood jets, pulsating latex mutants, inter-dimensional rambling, psycho-sexual tinges, fractured religious undertones, devil dogs, evil children and mad grannies into an absurd supernatural potage.

Sam Neill is totally odious as slime-ball investigator John Trent, exuding an inappropriate smugness which makes him hard to root for. The lack of a compassionate protagonist slightly blunts the horror but a unique central concept, frenetic editing and slick visuals meld well with a compelling plot that’s terse enough to compensate for some stale supporting performances and hackneyed dialogue. Cane’s publisher, the brilliantly named Jackson Harglow (Charlton Heston), tasks Trent and his inquisitive editor Linda Stiles (Fright Night Part 2’s Julie Carmen) to track down the mysterious writer and his missing manuscript. When doing so, the pair discover Hobb’s End (a stone’s throw from Castle Rock), the “fictional” town that frequently features in Cane’s novels. 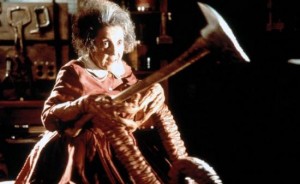 The story then twists through alternative realities and spiritual meltdowns before nestling into meta for a mad, grand finale (a ground-breaking move at the time of it’s inception). After a series of warped visions, nightmares within nightmares and a close encounter with an axe-brandishing mad man, In the Mouth of Madness devolves into total abstract delirium, but in doing so appears braver, scarier, and more inventive as its reality boundaries are pierced then broken along with Trent and Stiles’ psyches. David Warner pops up briefly as Doctor Wrenn, Trent paints crosses all over his body to ward off monsters and Cane proclaims that “religion seeks discipline through fear but doesn’t understand the true nature of creation. No one has ever believed it enough to make it real”.

The antagonist considers Christ and then cracks into Trent’s subconscious prompting the story to skulk  into an elongated drug-fed Twilight Zone-like episode (not a bad thing) that’s a must for both horror fans and general film aficionados partial to the off-kilter. With wonderfully crazed visuals that evoke the darkest of Dali or the sick-tinted subconscious of a drug addled Ken Russell, Carpenter crafts a frequently genius, consistently maddening and often very funny broken ghost train into hell. How can you not love (and laugh) at an axe-wielding old lady elevated by her own tentacles?

Wes Craven also transcended film/ franchise reality with New Nightmare in 1994, infamously superseding the Scream series’ “post-modern” self-referencing. While Carpenter falls slightly short of breaking the fourth wall, he forages from the genre like a sugar-psyched toddler, crushing and assembling tropes in a Frankenstein manner to form a film that’s fundamentally flawed in its execution yet matchless in design. While In the Mouth of Madness is primarily for horror fans, it roars with creative energy, a discombobulating edge and an endearing fervour/ temperament that transcends it’s genre trappings. It is in its ability to embrace numerous sub-genre tropes and seem original in doing so, where ITMOM finds its strength. The story, when combined with Carpenter’s wild visual style, twists it into an electrifying, mind-bending, dream warp with skin-crawling set-pieces and blood-letting scares. 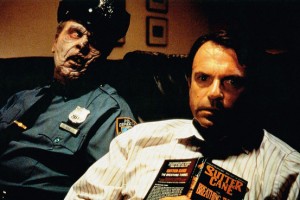 Some of the characters and performances are lumpy and the dialogue doesn’t always resound but the plot is punchy, the visuals superb (they shimmer on blu-ray) and a festering dread develops throughout before becoming a thunderous terror, threatening its protagonists’ sanity and lives. It’s easy to imagine ITMOM alienating mainstream audiences. The film is unquestionably bat-shit and childlike in its readiness to surrender logic and estrange. Yet it is from this state of play where Carpenter prevails, crafting a fascinating hunk of demented genre pulp with the wayward, gory vehemence of an artist gone astray. It’s arguably one of his finer latter works that definitely needs revisiting. Extras include: a theatrical trailer and a commentary by John Carpenter and Director of Photography Gary B Kibbe.