Telluride, the setting for Mountain Sickness, is a picturesque ski resort in the Colorado Rocky Mountains, which has become a destination of choice for the wealthy. The small mountain town is quickly growing from being the best kept secret to a ski resort for the rich and famous. A seemingly normal day becomes anything but, as a few residents start to come down with a mysterious illness.

The author spends the first part of the book introducing us to residents of Telluride. The focus is on giving us the sense of place and the people. It’s a tactic that works well in setting up the inevitable terrible events to come, and gives the reader a reason to care.

We are introduced to a host of characters including Chris with Mountain Rescue, Georgia the radio DJ, and an older couple named Nellie and Bill. For the most part the characters are interesting, although it’s possible that there are too many to keep up with as we progress through the book.

The sickness engulfing the community turns the infected into rabid, violent, frenetically moving zombies, in the 28 Days Later mold. Children are savaged just like adults. There are family members attacking each other. The plague doesn’t spare or play favourites. The book is brutal at times. 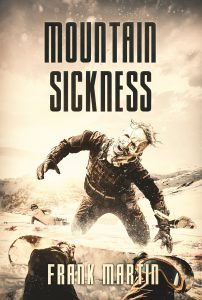 The remoteness and weather are a major issue for survival. Heavy snow storms and the lack of visibility adds a layer of fear and danger. You can’t just run away into the wilderness and hope to survive the elements. There is the added jeopardy of the survivors having to protect kids.

The isolated mountain resort and snow is a great setting for zombies and gives a fresh angle on the genre. It’s an exciting read – action packed and with plenty of gore. Personally, I find it hard to get too enthusiastic about zombies anymore, but if that’s your thing, you’ll enjoy it.