Synopsis:
Ike and Addley just want to make their Mother proud and if that means a bit of kidnap, rape, torture or murder then so be it- what Mother wants, Mother gets. The trio live out in the middle of nowhere, their ramshackle abode hidden away in the woods so their crimes can go undetected. When three old school friends, Abbey, Jackie and Trina, go camping on a reunion weekend they stumble into Mother’s territory and invite the attentions of the boys. But these girls aren’t going down without a fight, and Ike and Addley are about to discover they have picked up more than they can handle this time.

88 Films crack out another addition to their Slasher Classic line with the UK BD debut of MOTHER’S DAY (1980) in grand 2k style. Now everyone can lap up the crusty production values, and gross out effects, of this little low-budget slasher hybrid; delivered on this release with the benefit of a slick high def rendering. Thus another piece in the Troma legacy arrives upgraded for UK fans for the digital age. Fans should not be disappointed with any aspect of the package either given that the film looks fresher than ever on BD and comes with a respectable amount of extras to boot.

It goes without saying that any film tapping a rape-revenge/comedy vein isn’t going to be for everyone. This was an early picture for Troma as a studio- as opposed to the countless numbers of non-Troma made features the label distributed throughout the seventies and it sets up the company mission statement of boundary breaking and bad taste unflinchingly. What is interesting is that even in these fledgling days MOTHER’S DAY demonstrates Troma have always been a company who were prepared push the remit of exploitation and delve into areas that blurred those lines between good/bad taste further than ever before; indeed  pushing into areas that very few others were prepared to go to in such explicit style. You have to hand it to Lloyd Kaufman and co. they never compromise when dealing out the nasty goods to fans. MOTHER’S DAY was one of the first Troma home grown products to channel the voice for which they would become so well known. Although their distribution of Joel M Reed’s gritty little homage to HG Lewis’s WIZARD OF GORE, namely BLOODSUCKING FREAKS, had already kicked off a huge furore with critics a few years earlier- Reed’s ‘classic’ even today has the power to appal critics. So with the bar set high there was only one way they could go when the company started to make their own films. However, it is fair to say while Reed’s little flick can be seen of a something of a try hard when it comes to shock value- for these reasons it remains hilarious, but not on the level it was intended- Charles Kaufman’s effort here is slightly more sophisticated; ripping into aspects of popular culture and warped family values with some seething dark hearted comedy.

In essence MOTHER’S DAY represents, as a whole, a Frankenstein’s monster assembled from exploitation themes of the time; take one part TEXAS CHAINSAW MASSACRE, another part LAST HOUSE ON THE LEFT, add in some golden age slasher sensibilities in the look and feel of the graphic effects, and a bunch of intentionally biting comedy values, and this is what you get- all curated by director Charles Kaufman to exploit everything to its upmost. Some might be put off by the swaying back and forth of violence and slapstick laugh out loud themes, and the pacing could have done with a bit of tightening up, but the film is- if nothing more- at least honest in its intention to go peddle to the metal in delivering its central concepts in the worst possible taste. However it must be noted the film lacks the full on splatstick approach of later offerings such as THE TOXIC AVENGER- instead layering on an air of mean spirit in with the goofy humour (something which at times can feel ill placed). What this all boils down to is a question of taste, as for a low-budget, early 80’s number it is relatively well made and can’t really be faulted, when held up next to its peers, on that score. The effects, especially, for the time are particularly juicy and bloody and will not disappoint those who enjoy the art of practical Golden Age grue.

While MOTHER’S DAY is far from perfect one thing that does work is the performances. There is some establishing of character for the victims too. We get introduced to Abbey (Nancy Hendrickson), Jackie (Deborah Luce) and Trina (Tiana Pierce) quite early on, and therefore it is easy to root for them when the shit hits the fan. Being slightly older than your usual slasher ‘fodder’ the women inject a bit of gumption into their roles that is rarely seen in likeminded pictures. While warped hillbillies Holden McGuire as Ike and Billy Ray McQuade as Addley are suitably gross, idiotic and sadistic for their parts, it has to be said Rose Ross steals the show as Mother; her sweet little old lady façade quickly giving way to show her true psychopathic and heinous nature in perfect psychobiddy tradition- with some comic book elements added for extra effect.

As stated, for fans, this is a fantastically rendered disc from the team at 88 Films and worth picking up if you haven’t already upgraded your copy to BD. 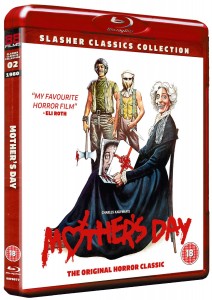