MOST LIKELY TO DIE: Film Review 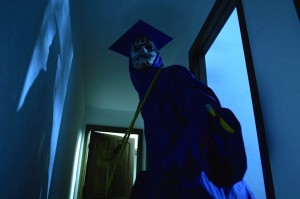 Synopsis:
A group of former classmates gather for a pre-party at one of their homes the night before their 10-year high school reunion, and one by one, they are brutally slain in a manner befitting each’s senior yearbook superlative.

Anthony DiBlasi is best know for his focus on character-driven horror in which he likes to delve into some incredibly dark places. For his latest project DiBlasi has taken a slight sidestep from the work we are accustomed to seeing from him, tackling the slasher genre to deliver Most Likely to Die. In a similar style to the likes of Scream, I Know What You Did Last Summer and Urban Legend, Most Likely To Die serves up a group of stereotypes as victims to a masked serial killer. However, Most Likely To Die still retains DiBlasi’s love for character-driven storytelling and works within the conventions of the slasher genre to lovingly craft a fun throwback to the ’90s.

Despite a quickly executed first kill, Most Likely To Die becomes a long ride for genre fans waiting for some hot crimson soaked action. Instead DiBlasi takes time to establish his characters and it is not until towards the end of the second act that the next person falls. This may prove problematic with audiences looking for a fast-paced slasher flick but rest assured that this is no snoozefest by any means. In fact, when the action picks up the film becomes a conventional slasher film rife with clichés and the occasional inoculation of comedy delivered mostly by gossip blogger Perez Hilton.

Speaking of ex-celebrity big brother housemates, Perez Hilton stars with a host of relatively unknown cast members who serve as cannon fodder for the masked killer leaving the duties of final girl to Glee’s very own Heather Morris. As Gaby, Morris delivers a satisfying performance. She handles her character’s emotional scenes effortlessly but overall she shines in the role and delivers a performance which is starkly different to anything else that we have seen her in. This said, the entire ensemble deliver great performances and, surprisingly enough, so does Perez Hilton whose over the top delivery offers audiences that much needed comedic relief.

As with any decent slasher, the killer’s costume is key. Complete with a cobalt blue graduation gown, a mask made out of year book pages and a mortarboard with a razor sharp edge, the design of the killer is just as effective and menacing as the famous Ghostface costume was in Scream. The attention to detail is incredibly creative and it was great to see it on screen. Although nasty and somewhat equally as creative, the death scenes are incredibly tame which was sadly a disappointment.

Overall, Most Likely to Die does a great job of emulating the tried and tested approach to the subgenre but it is a shame that it doesn’t quite stand shoulder-to-shoulder with the more popular ’90s slashers. Even so, there’s a fair bit of fun to be had here and with the ending leaving way for a possible sequel I would be interested to see the story progress.