Most Likely To Die: An Interview With Anthony DiBlasi 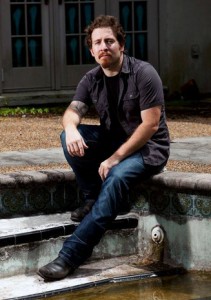 Filmmaker Anthony DiBlasi is well known to FIlm4 Frightfest attendees after several of his films including Dread, Missionary and Last Shift were screened during previous events. This year will see DiBlasi return to the festival with his latest project Most Likely to Die. The film follows a group of former classmates who have gathered for a pre-party the night before their ten year high school reunion only to be picked off one by one by a killer holding a serious grudge against them all.

The film stars Heather Morris (Glee), Jake Busey (Identity) and Perez Hilton and will be shown as part of the discovery strand over the August Bank Holiday Weekend. Ahead of the festivities we sent Jon Dickinson to have a chat with Anthony to discuss how he got the gig, what it was like to create a screen villain and so much more.

SCREAM: Congratulations on getting into Film4 Frightfest. Quite a few of your films have played previous festivals, what do you like most about the festival?

Anthony DiBlasi: I love the guys there, Paul and Alan… I always like to go there or rather go there when one of my films is playing, I just love it. I always tell people it is my favourite festival and that’s because it really is. There is something about it which feels so inclusive and I get to hang out with all the audience and go to the same bar every night. With how the movies are spread out it is always so fun to sit and watch everything. It is such a fun time, it’s really great. The atmosphere is fantastic, you know?

I agree with you. We’re big fans of FrightFest and we can’t wait to go this year. So we’re here to talk about your latest film Most Likely To Die. What drew you to the project?

My agent sent me the script and these two producers, Hannah Pillemeer and Margret H. Huddleston, invited me to drinks. I have been with my agent for a very long time, she’s from Boston and I am too. She thought we would get along so I went out and had dinner with them and we hit it off. They started to talk about a couple of projects that they had but they had not had much horror experience. They were working for a company called Marvista and they were looking for someone with horror experience. I jumped in and they sent me the script which I loved from the get go. I always wanted to do an old school slasher where we fetishise the villain and hopefully I’d get an action figure out of them or something (laughs). I wanted to spend time making the villain look sexy, to concentrate on the kills to make and to focus on the characters and with this I thought it was good as I would get to do all that.

Laura Brennan had written the script I believe in the ’90s so it had this feel of that period. I thought it was great in that it was like a time capsule of that era and that kind of slasher that I liked. So I went in and pitched my idea very specifically about wanting to focus on the mythology of the character. The original script didn’t have much focus on why the killer is doing it or what he was wearing. I wanted to put him in a cobalt blue graduation gown and a mask because of this and I wanted him to have these weapons that he uses to kill… something to tie it all together in this complex mythology which I always have liked with slasher films in that the reveal has to always be complicated and linked throughout the cast. The project allowed me to do all this stuff so yeah.

Speaking of which, I loved what you did with the killer’s costume. It’s very iconic. What influenced the design? 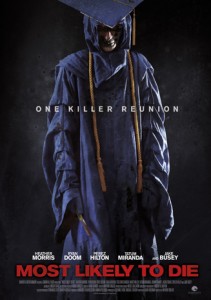 In the script the killer was described as wearing a black graduation gown and a skull mask. However, I wanted to make something more specific and something unique to this type of sub-genre. So I drew some pictures of what I wanted the killer to look like as in the various layers of the robe and something like the early 1900’s kind of look to the costume. Their robes were very heavy and had a lot of layers.

I call the killer ‘The Graduate’. His mask is specific to his mythology which is clear once you watch the film. As for his weapons, I thought to myself about what he would kill with and why he would have those particular weapons. I thought the killer has a mortarboard cap and I thought he had to use that as a weapon so that was bladed on the edges of the cap. The killer has his honour cord which is also a perfect killing device.

I wanted the killer to have some sort of impaling implement so he has this razor which again links to his mythology. So that is what tied it all together.

Tell me a little bit about your casting process.

The casting process was quite easy and fun. Marvista said they wanted Heather Morris and I thought that was a great idea as it would tie in with her Glee fanbase and stuff like that. I think her fans would be very receptive and follow her into this kind of film. We also wanted someone for this older character. We looked at a bunch of older actors then Jake Busey really seemed perfect for the part. Perez was our wild card. Marvista and I were talking and we specifically searched for internet talent and people that you would not usually expect to get on the rosters for casting. They asked what I thought of Perez Hilton and I said it wasn’t a bad idea… I mean I don’t know. I’ve never met him. I used to see him all the time in a coffee shop before he became big so I said I’d take a meeting with him. When I sat down with him I really liked him. He really had this deep pathos and an inherent sadness which I thought was perfect for his character. He had a lot of great ideas about how he wanted to play the character. People may not know but he originally started out as an actor and went to University for it and had done a movie or two before his blogging career took off. So I said we should make him an offer and he jumped on board.

Perez Hilton is known best in the UK for his appearance on Celebrity Big Brother. He caused quite a fuss on the show. What was he like to work with on set?

In all honesty on set he was extremely committed and enthusiastic. The best that you can ask for is a fearless actor who will just jump in and not worry about looking like an idiot. So in a way I guess he steals the movie because of it.

Thinking back to the shoot, what do you remember as your favourite moments on set?

Anything involving The Graduate’s scenes. Jason Tobias who plays Ray also has another role in the film as he played The Graduate as a stunt person. It was fun to work with him… when people put on a costume they have to think what they are doing. In his case we were making a slasher movie so he had to think how he would act and for someone who has not played a killer before, we had some great conversations about how an actor gets to create his character. I started to talk to him about these possibilities of what he could do. We talked about Jason Vorhees and what his motivations are as these are a great way to start. You get to think about why and how he would attack his victims and how he would toy with people… are you animated or are you still… you either emote a lot of personality or you don’t. That is what I think makes a huge impact when you compare characters like Freddy Kreuger and Michael Myers who are two vastly different characters.   So I had a great time working with him and every scene he appeared in was just fantastic. Also working with Gary J. Tunnicliffe who did the effects, they were fantastic. It was all an excellent collaboration as this stuff is always fun. 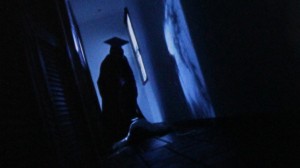 Having as much fun as you did on set with the cast and crew, do you think there is scope for a sequel to Most Likely to Die?

Yeah. We have talked about it very early on as I pitched a sequel as to where it would lead. The natural progression is evident in the film and I think the night before the reunion, and as any good sequel should, the second one should be a little bit bigger. There should be a more drastic set piece which in this case would be the reunion itself so we could introduce some more surprising elements. So yeah I would love for the story to be continued with the cast and The Graduate.

Why should our readers check out Most Likely To Die?

Think of this as a good thing or a bad thing but for horror audiences some love slashers and some of them really don’t, so I like to spend a lot of time on characters and exploring their relationships. So what made movies like Scream unique is the sense of meta which at the time was great as it was the characters which made you want to want to watch and carry on. For me, if people are fans of Scream they might like Most Likely To Die too as it is the characters that anchor the movie. There is certainly a lot of character work in there and I think having the time to get to know the characters and getting to find out their wants and needs is what some horror audiences out there want to see and the other half will be like just get on with the killing already. Most Likely To Die balances the character work and the impact of the kills and will keep audiences happy. 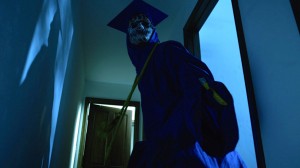 Well I have a film coming out soon through Magnolia which is Last Shift. It played at the FIlm4 FrightFest all-nighter last year which I unfortunately didn’t get to go to. It is coming out in the states on October 6th and internationally soon after. Then I am doing another film with Marvista called To Die With which is a kind of Hitchcockian thriller with an actor friend of mine called Patrick Fischler who I developed it with. We’re heading into pre-production on that now.

So do you think you will stay with the horror genre or will you eventually branch out as your career moves forward?

I think I will bounce back and forward. I like to explore a lot. I am a big fan of every genre but who knows. Maybe I’ll make a romantic comedy someday too… I just like movies and I watch all kinds but I think there is definitely some horror future also as well as some sci-fi, drama and stuff like that. Keep an eye out.

We will. Thank you for your time today and I hope you have a fantastic FrightFest.