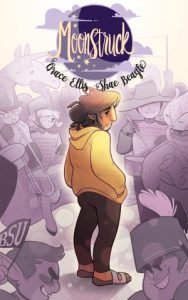 Ah, is there anything more romantic than weirdos in love? Smeared black lipstick, swapped cassette tapes, accessories clicking together as hands are held. The only thing that would make it even better is if they were ACTUAL weirdos! I’m talking vampires, werewolves, goat people, and ghosts. While dating a half-dressed vampire is not exactly genre news, Moonstruck decides to have a little more fun with it by not only having all the creatures share a world together, but putting in a pop-art spin that both comic and illustration fans will adore. A bit like Friends meets a mythology book, Moonstruck doesn’t shy away from adding a dark twist to a fun, queer-friendly story that is perfect for teen and tween readers.

The first issue focuses on establishing the world of the lead Julie and her day to day happenings. Julie, who is secretly a werewolf, spends her days working the coffee shop with her co-worker Chet, who happens to be a centaur. Between filling cups of coffee and dealing with her grown-up bully of a neighbour, Julie enjoys re-reading kids mystery books and pining about her crush. When her Chet purposely knocks over a box of stirrers, she is forced to make her way to another coffee shop to get more, but she gets more than stirrers when she arrives. The fortune seer that runs the shop suddenly gets a revelation about Julie’s future and it’s not looking too good.

In case the description wasn’t clear enough, this isn’t exactly a horror story as much as a slice-of-life monster mash similar to the Addams Family. Creatures of all types freely walk the streets and no one blinks twice, most likely because they themselves are some sort of freaky fiend themselves. By approaching the work in a world where monsters are already accepted, the creators managed to circumvent the problem of ‘keeping things secret’ and opening up the comic to a story beyond the creatures themselves. It’s a very fun way of suspending belief and allows the readers imagination to settle nicely into the comic without any bumps in the road. This, in turn, allowed for a wonderful exploration of the characters personality and each one manages to stand out on their own. 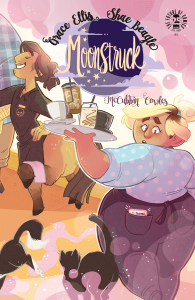 Personally, this reviewer is absolutely star-struck by the art. I’ve been known to be quite harsh on comic art, be it poor inking or terrible sequential movement, but these illustrations are damn near perfect for the art style used. Artist Shae Beagle, a newcomer to comics, uses her illustration degree to help push this comic from pretty good to awesome. Her animation inspired art and smooth panel transition creates a work that can easily make its way onto the big screen. Heck, I wouldn’t be surprised if she ends working for an animation company after Moonstruck, that’s how good it is. Each character is individually designed, each with their own body shape, facial features, and clothing styles, which helps add to the overall look. The only thing that keeps it from being 100% is the blank backgrounds in the transition panels. She’s a wonderful movement and character artist, but suffers in non-character detail work, though what she does put in is properly angled and shaded, so it’s a small complaint. She knows how attract the eye and perhaps simply chose to not clutter the scene.

If you’re looking for a fun read for your own weirdo or simply feel like looking at some kick-ass art, check out Moonstruck #1, in stores now!