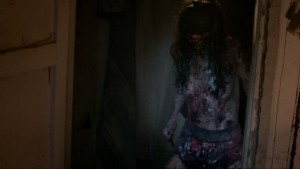 Turkish director Can Evrenol has made a lasting impression on festival audiences the world over with his feature debut Baskin, which premiered at TIFF in September, and was most recently screened at Glasgow’s Frightfest. Ahead of its US release, distributors IFC Midnight have put together a new trailer, which you can see below.

While this new trailer doesn’t hold back on the film’s gory, surrealist delights, it better represents the film’s slow-burn and reliance on brooding atmosphere than the no-holds-barred insanity of last year’s festival trailer.

Here is IFC Midnight’s synopsis:
A five-man unit of cops on night patrol get more than they bargain for when they arrive at a creepy backwater town in the middle of nowhere after a call comes over the radio for backup.

Entering a derelict building, the seasoned tough guys and their rookie junior, who’s still haunted by a traumatic childhood dream, do the one thing you should never do in this kind of movie: they split up. They soon realize they’ve stumbled into a monstrous charnel house and descend into an ever-more nightmarish netherworld where grotesque, mind-wrenching horrors await them at every turn.This is one Baskin (that’s “police raid” to you non-Turkish speakers) that isn’t going to end well.

But wait! Things aren’t what they seem in this truly disturbing, outrageously gory, and increasingly surreal film whose unpredictable narrative pulls the carpet from under your feet and keeps you guessing right up to the final moment. A wildly original whatsit that reconfirms Turkey as the breakout national cinema of the moment.

Baskin is released on VOD and a few selected US cinemas on March 25th.