Written by Christian Cantamessa and Chris Pasetto with art by Lukas Ketner and Jean-Francois Beaulieu, the comic series was launched in June. A modern twist on the ancient Greek myth of Theseus and the Minotaur, the comic still sees Theseus entering King Minos’ Labyrinth, only the maze itself is unimaginably vast, and houses a bizarre, fantastical world. If Theseus cannot defeat the half-man, half-bull monster, the entire world could come to an end. 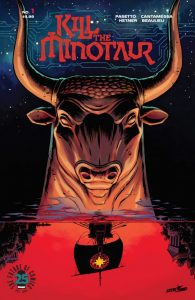 Cantamessa and Pasetto are attached to pen the script for the adaptation, which is planned as a blockbuster sci-fi thriller.

“When we created the comic, we wanted to put our own spin on a classic Greek myth, incorporating strong relatable characters and spectacular scenes so it would read like a blockbuster movie,” Pasetto and Cantamessa said in a statement. “It’s a dream come true that we can now make this story come alive on the big screen.”

Kirkman and his Skybound partner David Alpert will produce the feature, along with the company’s co-presidents of TV & film Bryan Furst and Sean Furst.