Synopsis:
After inadvertently discovering that her husband might be cheating on her, Sandra (Katrina Bowden) locks her toddler son David (Nixon and Krew Hodges) into the back of their new top of the range Monolith 4×4 – the all-terrain vehicle to end all all-terrain vehicles – and heads cross-country to California to confront him. Accidentally hitting a wild deer on a lonely stretch of desert highway, Sandra gets out of her vehicle to try and help the dying animal. Suddenly, and without warning, David accidentally triggers the Monolith’s safety settings, putting the vehicle in complete lockdown with him inside and his mother outside. With the desert temperature rising and unable to explain to David how to open the Monolith, Sandra begins to loose her sanity as she finds herself at the mercy of an increasingly hostile environment. 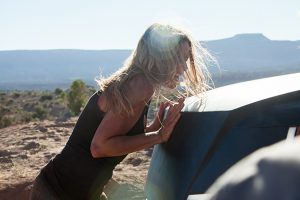 In truth, horror derived from real-life scenarios is always going to be more effective than anything coming from an imaginary source. Make-believe, however realistic, is always going to be just that, make-believe. In reality it is never going to exist. On the other hand horrific scenarios arising from humans or sources found in the everyday world, will always have the edge: even if it is still farfetched, the fact that it could, just possibly happen, should be enough to unsettle even the most jaded sceptic. Which is what makes director / writer Ivan Silvestrini’s Italian backed, American based thriller Monolith (2016), such an effective example of the cinematic chiller.

To discuss in depth Monolith’s plot-line would be to give away much of the excitement, of what in is in reality a pretty slender scenario. One of the film’s biggest strengths however is that Silvestrini manages – despite the flimsy plot – to keep the viewer riveted for its entire duration. One of the secrets of this I would hazard a guess is the originality of the car at the centre of the story. As vehicles in real-life become increasingly sophisticated, providing the last word in comfort and protection for their passengers from the world without, the most terrifying aspect of Monolith is that it will most likely be a case not of if, but when, we see such things in reality.

After the car itself, it is Bowden who steals the show as Sandra – which in truth isn’t hard as, apart from the twin Hodges brothers who play her son David, she is virtually the only human character on screen for the majority of the film’s eighty three minutes. Bowden’s portrayal of Sandra is riveting. She never lets your attention slip, as she disintegrates from ditsy, self obsessed, young mother, to a woman on the edge, seeing her life and that of her son slip through her fingers as they fall victims to the vagaries of their natural surroundings. 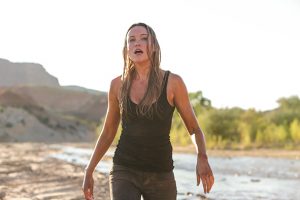 Admittedly – like many films, no matter what their genre – Monolith struggles to sustain credibility throughout its entire running time. During the climatic scenario, you will likely be screaming at the screen that what is unfolding before your eyes is hard to accept. This however is almost the only occasion throughout the entire production, that the viewer feels anything less than impressed with Silvestrini and his team’s ability to make you believe in what is taking place.
Cleaver Patterson (@Cleaver68 / @ScreenAndGone)