Who is the Monster in this clip from A Monster Calls?

The clips are coming quick and fast in the run up to the release of A Monster Falls, which is set to be unleashed in January in the UK and USA. In this new clip from the film, Connor is quietly bullied by a fellow student in the cafeteria, which leads Liam Neeson’s Monster to take shape. It’s clearly taken a leaf out of the NeverEnding Story’s book, but this clip is a great example of the film’s more action-packed moments. 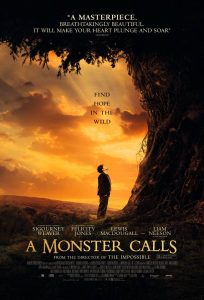 In A Monster Calls a young boy called Connor (Lewis MacDougall) seeks the company of a tree monster to help cope with his mother’s dwindling health. Faced with a life without his parent, Connor must muster the courage to cope independently with the problems that life is throwing at him. It’s a touching and creative adventure that is definitely worth checking out in the New Year. We love the film’s blend of live-action and beautiful animation which reflects the film’s to-and-fro with heart-rending emotion and feel-good drama.