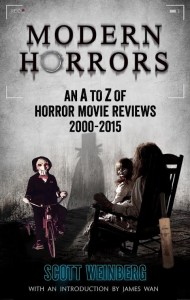 Got a Kindle? Love horror movies?

Get ready for the must-have horror movie review compendium… coming this Halloween!

Featuring an introduction by James Wan, director of Saw and The Conjuring, Modern Horrors: An A to Z of Horror Movie Reviews 2000-2015 is Scott Weinberg’s massive, searchable compendium of over 800 modern horror movie reviews, dating from 2000 to 2015.

“Scott loves horror movies,” says Starburst magazine, “and he makes you want to see all 800+ of them that are reviewed in this volume – 9/10”

The massive e-book will be available as a Kindle exclusive, sensibly alphabetized, and comprising 800+ reviews from 2000 to 2015, with an easy jump-to-an-entry contents page – but no cheap jump scares.

“Scott Weinberg has had a profound impact on the psyche of my career more than any other film critics out there,” says James Wan, director Saw and The Conjuring, in his exclusive introduction.

But Wan isn’t the only one to weigh in on Weinberg’s legendary critical faculties – and his influence on indie horror filmmakers.

Scott Derrickson, director of Sinister, describes Weinberg as “a supremely knowledgeable and sharply incisive reviewer [who] knows and loves horror cinema as much as anyone I know.”

Adds Darren Lynn Bousman, director of Saw II-IV, “Agree or disagree with his reviews, he is a fan of cinema and knows the art.”