Mirrored Warns of Dangers Lurking Within the Glass

Mirrors are frequently used in horror film for a variety of different reasons; they can be gateways to another world, used to emphasise a character’s descent in to madness or a simple symbol of someone’s life cracking beneath them. From classic horrors like Poltergeist and The Shining, to modern hits like Paranormal Activity, mirrors are great tools of fear and Mirrored is another film looking to show the frightening side of looking at your reflection. 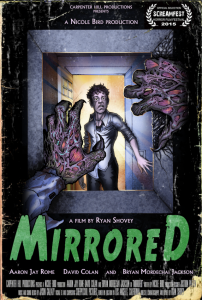 Synopsis:
Dylan’s depressed and all he wants to do is veg out in front of the television playing video games. But he needs to get a new mirror installed in his bathroom. Soon after, he notices weird things happen when he turns off the light in his bathroom.

The short film recently screened at Screamfest and will soon be playing at the RIP Horror Film Festival in Los Angeles between 29th-31st October. So, if you are yet to make plans this Halloween perhaps you should head over to LA and check out what Mirrored has to offer.

Mirrored will be directed by Ryan Shovey, who has a host of short horror films to his name, including Hunter and The Audition. The film stars Dave Colan, Bryan Mordechai Jackson and Aaron Jay Rome. You can have a look at a bunch of stills and the retro poster for the film to get a tease of what terrors are waiting for you within Mirrored’s mirror. 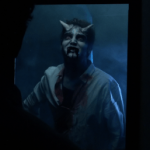 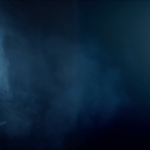 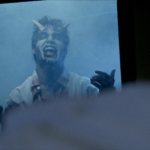