Mireille Enos Talks Welcome to the Blumhouse’s “The Lie” 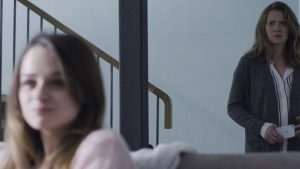 Amazon Studios and Blumhouse Television’s “Welcome to the Blumhouse” film series finally opens its doors to Prime customers amidst a huge amount of buzz. Both studios joined forces with the intention of bringing eight original and spine-chilling genre films from diverse casts and filmmakers to a platform where they would receive the wide audience they deserve.

One of two films which will be kicking the Blumhouse door wide open today is Veena Sud’s The Lie. Starring Mireille Enos and Peter Sarsgaard as divorced parents whose teenage daughter impulsively kills her best friend, they both find themselves desperately trying to cover up the horrific crime, but all their endeavors ends up spinning a complicated web of lies and deceit.

As Blumhouse urges viewers to “unsettle in” and enjoy “Welcome to the Blumhouse” on Amazon Prime today (October 6), SCREAM hopped onto Zoom with The Lie’s star, Mireille Enos to find out just how far her character is willing to go to protect her daughter…

SCREAM: This film has been a long time coming since its world premiere. It must be a relief to finally be able to get this out to audiences?

Mireille Enos: Definitely. We filmed nearly three years ago and then it premiered at the Toronto Film Festival. After that, there’s been this long journey with Veena [Sud] and Jason Blum committed to finding the perfect home for the film. I’m so thrilled that it’s landed at Amazon in this fantastic anthology.

Working with Veena Sud and Peter Sarsgaard again, The Lie is very much a ‘The Killing’ reunion.

That’s exactly what it was! Veena sent me the script and told me that she was already collaborating on it with Peter. The prospect of working with Veena, not only as writer but also as Director, and then with Peter, who I really love as a person and respect as an artist, I couldn’t even imagine passing this up. But then on top of that, I read it and the script was just so gripping and that twist at the end just left my jaw on the floor.

More than the actual lie itself, the film focuses on the drastic effects a highly toxic relationship has on a family.

It’s exactly that. Veena is telling the story of the toxicity of a family dynamic where there is no communication. The lie itself is obviously what starts the event but there are a thousand moments where that lie could have been made right if any one of the three of us had felt they could just be honest and communicate. There is just no communication between the three of them and that’s why the result is so devastating for everyone.

At the same time, all of the roles in the family were clearly drawn out by Veena. It was a classic dynamic in which I’m a divorced Mum who feels like she’s responsible for running the show. She gets emotionally detached and the details of the day become more important than the emotional life of her daughter. Under that kind of parenting, the daughter just becomes more and more withdrawn and private. I’m a Mum with a much younger girl and my daughter and I have our own stuff to sort out so I’m no stranger to those dynamics. As a result, when it came to preparing with Joey King we mostly worked on getting to know each other and liking each other and respecting each other’s work – something which was really easy.

Being a mother of young children must have taken its toll even though this is a work of fiction?

The idea that their child could make a choice that could forever alter their life for the worse is every parent’s nightmare but I’m fairly good at compartmentalising and doing all that digging and searching while I’m on set and then coming home and enjoying my babies as much as I can.

In “The Killing” you were in the exact opposite situation, helping parents find their missing child. Having approached these themes from the opposite perspective must have been a big help when it came to filming The Lie?

Sure. There are a couple of specific scenes in The Lie that are very telling about the effect this event has on her. We see how my character suffers the nightmare that their neighbour must be going through thinking that his daughter has gone and the fact that my family is complicit in that.

It was a challenge but it was great to be able to rise to that challenge and capture the lengths to which we will go when we feel cornered. We all think of ourselves as nice people but our capacity to pick a side and protect our own is always there. Without wanting to get too dark but there are so many stories like World War 2 where people knew what was happening but they just focused on keeping their own family safe and weathering the storm to get to the other side.

The lengths you go to in the end will definitely leave everyone in shock. Were there any desperate measures that you were going to take in earlier drafts of the script that would have taken things too far?

No. Obviously, we don’t want to do spoilers but I think that realistically people would not make the choses that we see in the final push of the film. But, what I think people will enjoy about this film is that everything builds in a way that you end up believing that these people might actually go as far as they do…

THE LIE is one of eight films in the “Welcome to the Blumhouse” series, and premieres worldwide today (October 6) on Amazon Prime.