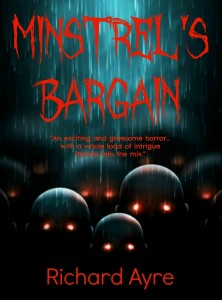 Music journalist Phil Sturgess is given an assignment to check out a new metal band called Minstrel’s Bargain by his editor – just a small piece for the magazine. Following their amazing performance as an opening act, the headline act’s singer and others get massacred. Turns out that’s not the only incident of violence and death surrounding the shows. A mystery begins and Sturgess is unwittingly thrown into it. Minstrel’s Bargain and their hypnotic lead singer, Kick Bizarre, have taken the music world by storm, rapidly moving from unknowns to chart toppers.

There is gore aplenty as people fall under the mysterious spell of Minstrel’s Bargain and succumb to the desire to cause death and violence. The randomness of those incidents and the way people behave is genuinely unsettling. I had a particular favorite involving an abused husband and an electric carving knife. We also see the violence escalate dramatically to some really large scale chaos. The author effectively creates tension throughout.

Phil Sturgess is a really likable character and his relationship with girlfriend Shelley is pleasant, supportive, and genuine. We get back story for Phil and how he came to love music, and it helps build an already like-able character. Along with that, he feels fear in a genuine and realistic way, the way any of us would. He gets shit scared, unlike many characters in horror fiction. He also has an air of vulnerability about him – that he is just a normal bloke. That’s endearing. As the violence and death come closer to home, you really feel for his plight.

Phil finds himself in the middle of the Minstrel’s Bargain mystery, very much confused and somehow singled out as a key player in it all. His guide is an enigmatic tramp. The tramp is a fascinating character. We find out that this is a replaying of an ancient conflict. The story behind the story is really captivating but I won’t go into it to avoid spoilers.

The 1980’s English setting really captures the feel of a simpler time. It took me back to my own metal concert going teenage years in the West Midlands – not quite that time period though! The energy and excitement of the Minstrel’s Bargain show enraptured the audience. I feel we’ve all had that almost spiritual experience with a live concert at some point. There are a few uniquely English references to soap opera characters, etc., but nothing that takes away from the story if you don’t catch it.

Throughout the book the mystery is unraveled. Phil begins to understand his role in events and what he must do to defeat or at least stop the evil. It all leads up to an epic finale that doesn’t disappoint. This is a thoroughly enjoyable read that will take you back to 1980’s horror books, and is reminiscent of one of my favorites, Shaun Hutson.