This news will come as no surprise to those who watched the excellent first season, but Mindhunter has officially been renewed for a season 2 on Netflix. The first season was stunning and impeccably acted, witty and eye-opening. Is it one of the best TV shows of the year? I would say, hell yes it is. 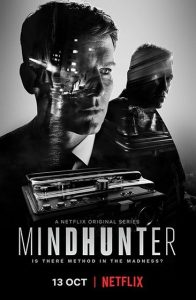 Season 2 will see the return of Jonathan Groff, who played the officious and brave FBI Agent Holden Ford, as well as his partner, the intelligent and takes-no-shit (for lack of a better description) Holt McCallany as Bill Tench.

Based on the novel Mind Hunter: Inside the FBI’s Elite Serial Crime Unit, the series followed a tiny unit within the FBI Behavioural team that interviewed serial killers to help solve current murders.

David Fincher produced and directed some of the episodes, along with Andrew Douglas, Tobias Lindholm and Asif Kapadia. The combination of a strong cast and crew, as well as a tightly written script helped the show excel. It was 10 episodes of perfection and I can’t wait for more!