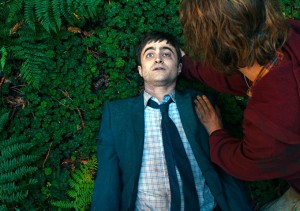 For lack of a better word, an astounding trailer has been unleashed for Swiss Army Man. You’ve probably heard of the film; it screened as part of January’s Sundance Film Festival and while many people loved it, there were a fair few walk-outs. It’s the one where Daniel Radcliffe plays a farting corpse.

The premise is wildly bizarre and unique as it follows a man (Paul Dano) stranded on an island who befriends a corpse (Daniel Radcliffe) – yep, a dead body – and the pair go on a strange and bewildering journey to get home. The trailer is absolutely as bonkers as it sounds and, really, no words can do it justice. Do yourself a favour and just check it out. It’s definitely going to be something audiences are going to love or loathe, and we can’t wait to make up our minds about it.

Swiss Army Man comes from directors Dan Kwan and Daniel Scheinert and additionally stars Mary Elizabeth Winstead, Timothy Eulich and Richard Gross. It will be released on 1st July 2016 in the USA.