Mind-Boggling Dave Made a Maze to Release in January

There are a lot of genre films coming out in the New Year, so get ready to add the mind-boggling Dave Made a Maze to your watch lists. The horror-comedy will be released on Blu-ray and Digital HD on 28th January, so you’ll be able to immerse yourself in the madness very soon.

Synopsis:
Meet Dave. Dave is stuck in a maze. A maze he made. Out of cardboard. In his living room…

While his girlfriend Annie is out of town, Dave decides to build a fort in his living room from cardboard boxes only to become trapped in a world that he himself created. It’s up to Annie and an oddball group of friends to rescue him, avoiding booby traps, giant human-eating Tiki faces, a bloodthirsty minotaur and fatally painful puns along the way.

Dave Made a Maze has been described as a cult classic in the making, with it being praised for its imaginative production design and homage to 1980s adventure-fantasy flicks. It sounds like something I’m going to love, so can’t wait to check it out in 2019. 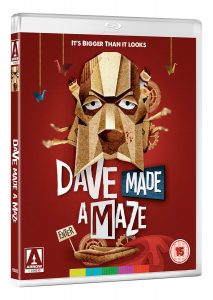