Mike Mendez Shares a Bloody Image from Don’t Kill It

Mike Mendez is currently immersed in the filming of his upcoming film Don’t Kill It and to share just how bloody it’s going to be, he’s released a sneaky snap from the film set. You can check it out in all its gruesome glory below. 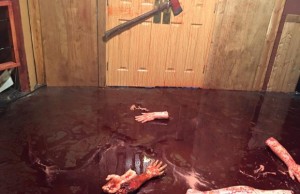 Mike Mendez has put a firm stamp on the horror genre with his films that include The Gravedancers, Big Ass Spider! and Lavalantula, so we can’t wait to see what he has in-store for us next. If this image is anything to go by it’s going to be one hell of a gory bloodbath. Blood and body parts cover the floor and an axe is keeping the door locked. It’s worth pondering what they’re trying to keep out; because we don’t think we’d like to spend a lot of time in a room like that, so it must be quite horrifying.

Synopsis:
When an ancient demon is accidentally unleashed in a sparsely populated Alaskan town, the only hope of survival lies in the hands of a grizzled old demon hunter Jebediah Woodley and his reluctant partner FBI agent Evelyn Pierce.

Don’t Kill It stars Dolph Lundgren, Courtney Gains, Kristina Klebe and Billy Slaughter. It has a release date slated for 2016.