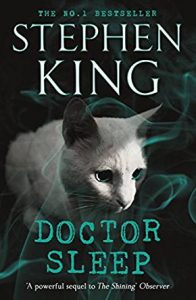 For many horror fans it seems, director Mike Flanagan can do no wrong. Having been lauded with acclaim for the likes of Oculus, Before I Wake and Hush, he pleased Stephen King fans last year with his impressive adaptation of Gerald’s Game, a book which really wouldn’t have seemed to lend itself to the screen too well.

When asked last year which other King book he’d most like to tackle, Flanagan mentioned Doctor Sleep, the author’s 2013 sequel to The Shining, and it would seem he’s got his wish. As reported by Deadline, Warner Bros. has put an adaptation on the fast-track, with Flanagan in the director’s chair.

The novel catches up with a now middle-aged Danny Torrance who, having never mentally recovered from his time at the Overlook Hotel, has suppressed his psychic abilities through years of alcohol abuse and squalid living. Eventually settling in a new place and struggling to stay sober, he finds his ‘shine’ returning and develops a psychic link with a young girl named Abra. Discovering that she is being hunted by a tribe of life-sucking paranormals, he dedicates himself to seeking her out and saving her from the group’s evil clutches.

I’m a big fan of the book, which dials back the horror elements considerably when compared to The Shining, running more on human drama and pursuit thriller elements. It also has a very cinematic feel, and I’m grateful that the film is in such safe hands.

Flanagan will rewrite a script by Akiva Goldsman, who will act as executive producer. Trevor Macy will produce along with Vertigo’s Jon Berg.