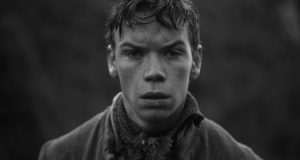 Fresh off the sun-drenched trip that was Midsommar, actors Jack Reynor and Will Poulter have reunited for an altogether very different project. Poulter stars in black-and-white horror short Bainne, Reynor’s directorial debut.

Set during The Great Famine of 1845-1852, Bainne is an Irish ghost story inspired by both ancient local mythology and traditional Japanese legends, as recorded in the late 19th century by Irish writer Lafcadio Hearn. Kelly Thornton, Toni O’Rourke, and Steve Wall also star.

Take a look at the creepy trailer for Bainne below.