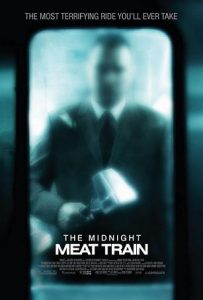 Based on a short story by Clive Barker, The Midnight Meat Train was released in 2008 before being rushed to DVD, and honestly, it isn’t hard to see why. The film suffers from many trends that now seem dated within the genre, and relies on excessive gore and jump scares to create tension. I have no doubt that Barker’s story is more effective on the page, but the film is heavy and bloated, with not nearly enough plot to justify the runtime. It’s no surprise that the film has been largely forgotten in recent years.

Bradley Cooper plays Leon, a crime scene photographer who wants to be taken seriously as an artist, capturing New York in a way that nobody ever has before. After photographing a woman who goes missing, Leon gets drawn into a mystery involving a butcher (Vinnie Jones) whom he suspects has been killing train passengers. After eventually witnessing the butcher commit a murder, Leon begins to lose his grip on reality, becoming more and more violent to those around him.

This premise is interesting enough, but the film quickly derails into a mess of bad CGI and terrible writing, with an ending so ridiculous that it completely undermines any of the suspense built up beforehand. After a rather predictable showdown in a train carriage, Leon discovers that the butcher has been killing people to feed a group of monsters beneath the city. The explanation for this is so half-baked that it yields far more questions than it does answers, leaving enormous plot holes and inconsistencies, and abandoning other plot strands entirely. The supposed twist-ending of the final scene can be guessed within the first fifteen minutes of the film.

One of the big problems with The Midnight Meat Train is its reliance on CGI, making the death scenes all look painfully artificial. Although the gore is often excessive and inventive – eyeballs pop out of heads and hearts are ripped from bodies – the CGI makes these sequences look more like a cutscene from a video game. Kitamura’s camera work is often impressive (there’s a surprisingly balletic sequence in which a woman gets decapitated), but this is never enough to make the film even remotely atmospheric. On the rare occasions when physical effects are used instead, they perfectly demonstrate the limitations of relying on CGI to create tension.

The biggest problem, however, is Jeff Buhler’s script, which is both ridiculous and banal. The dialogue is consistently lifeless throughout, and characters remain bland and two-dimensional. As Leon gets drawn into the mystery, his personality begins to change. He starts to eat meat (a sure sign of murderous intent, apparently); he becomes moody and withdrawn; and his perfect relationship begins to sour as he becomes increasingly violent towards his girlfriend. There is a potential here to explore some genuinely interesting ideas, but the script is so undeveloped that it never feels the need to make a point. By the end of the film, the changes in Leon’s character become laughably unrealistic. It’s one thing to see his personality change, but he literally goes from someone who hates the sight of blood to someone capable of a ten-minute knife fight with Vinnie Jones. Admittedly, at this point, it’s hard to care either way. 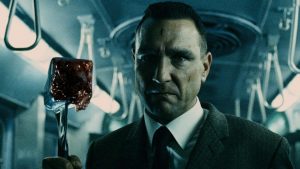 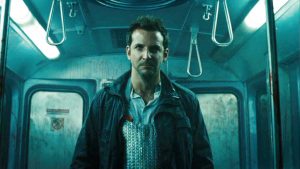 But in its defence, The Midnight Meat Train isn’t totally suicide-inducing. Director Ryuhei Kitamura does have an effectively gritty style, drawing out all of the cramped, dirty aspects of life in a big city. The train scenes in particular are saturated in gelid blues and greens, a trend that was ubiquitous in early 2000s horror films. The train stations here are all cold and impersonal, filled with sharp lines and angles, and the exterior shots create a sense of danger constantly lurking off-screen.  Similarly, the actors – especially Bradley Cooper and Leslie Bibb – all give fairly decent performances, doing everything they can with Buhler’s mediocre script. This isn’t enough to redeem the film, though it does make it slightly more watchable.

The Midnight Meat Train – as the terrible title suggests – is a bland, middle-of-the-road thriller, packed with clichés, questionable plot devices and stale, uninteresting characters. People who like the torture-porn subgenre might find the film entertaining enough, but for those who don’t, The Midnight Meat Train certainly has ideas above its station.