“We’re trying to push horror into some areas that haven’t been explored in a while,” says Jon Keeyes in the press materials for his latest film, The Harrowing, which he calls “…an intellectual horror movie that questions reality, explores the psychological and metaphorical meaning of demons, and yet entertains with a lot of great terror.”

A hard-boiled horror-thriller said to be in the vein of Jacob’s Ladder and Angel Heart, the film stars Matthew Tompkins (who appeared in Keeyes’ Nightmare Box) as vice detective Ryan Calhoun, who stands accused of the ritualistic murder of his friend. Going undercover to seek out the truth behind the killing, he must face the possibility that demons may be real. The Mummy’s Arnold Vosloo co-stars as the mysterious Dr. Whitney, with bona fide genre legend Michael Ironside (Scanners, Visiting Hours, Total Recall, Turbo Kid) as jaded police Lieutenant Carl Logan, who is investigating Calhoun. The film also stars Morgana Shaw (Salem), Damon Carney (Hellraiser: Judgement), and Arianne Martin (Drive Angry). 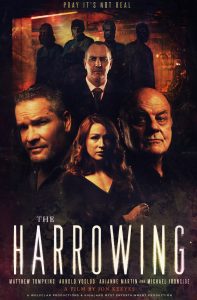 “The idea of playing a rough-shelled, complex character like Ryan Calhoun, so damaged that reality begins to distort for him to the point that he begins to question his very identify, was fascinating,” says Tompkins. “But to have two powerful actors like Michael Ironside and Arnold Vosloo on conflicting sides of the looking glass was thrilling… it kept me on my toes, and I think it will absolutely have the same disturbing effect on the audience.”

Keeyes also wrote the film, as well as producing alongside Tompkins, James Cable, Carl Kirshner, and John Walpole. Having wrapped filming in Dallas, Texas, The Harrowing is currently in post-production.