“Around here we like to do things with a bit more joie de vivre.” That’s what Michael Ironside’s character, Zeus, states in the first feature outing for Anouk Whissell, François Simard and Yoann-Karl Whissell (RKSS) and that’s exactly what you can expect. If you thought the recent post-apocalyptic humdingers Mad Max: Fury Road and Wyrmwood were all kinds of bonkers and all kinds of awesome, Turbo Kid is all set to prove that it’s actually GOOD luck that comes in threes. The screenwriting/directing trio have concocted a cult gem waiting to happen, pushing their BMX pedals to the metal to provide a slew of blood-soaked slaughter and unbelievably wigged-out yet winsome characters.

In anticipation of Turbo Kid’s screening at this year’s Film4 FrightFest, SCREAM’s Howard Gorman caught up with Michael Ironside at Fantasia Film Festival to talk about this cult gem waiting to happen… 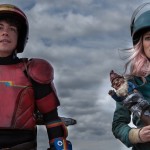 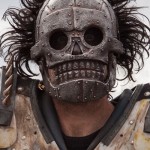 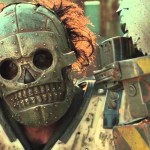 SCREAM: Something you swear by is to never repeat yourself and never tread on anything you’ve done before. Obviously Turbo Kid is about as unique as they come but what was it specifically that hooked you in?

Michael Ironside: Well I met the directors first (we laugh and call them the three-headed dragon) who were so infectious with enthusiasm. When the script was sent to me it was a little bit on point. I think I was in Belgrade shooting a movie and we talked over Skype and they told me they wanted to take the genre to an edge and kind of pass comment about going over the edge. They wanted it to be a little bit of a satirical, fun joyride. I asked them if they had enough money to do this and they said yes because this wasn’t a money project. Nobody got rich off this project. Also, the lack of money limited our choices in a lot of ways in terms of the shooting but I think we were really succesful in taking that genre and turning it tongue in cheek and pushing it to an edge whilst keeping it as a straight as possible. It was fun right from the beggining when I first met them, through the shooting and right up to Sundance where we first saw it in front of an audience and got such a wonderful reaction.

I have to tell you I don’t usually do the whole press thing for films, I really don’t. I only do it for films I care about and I really care about this one. We went there with no money, no accomodation and we were all there because of the directors as they were such enthusiastic people and it really worked.

And would you say they chose you given the film’s penchant for all things ’80s?

They had in fact being trying to get hold of me for about 6 to 8 months but I had been off somewhere in the world as I’m always working somewhere. A friend of mine was at the Toronto Film Festival and he said you’ve got to come to a party so I went and they were there. They were totally aghast when they saw me and they told me about the film. That was when I told them to send me the script and later I talked with them. Also, Anne-Marie Gélinas, the producer, she was the real saint in all of this and protected us and made sure people stayed out of it. It’s just one of those magical things where everything worked and we were all on the same page.

I think you were concerned a little about the comedy at first.

Not so much the comedy. The comedy is a juxtaposition of what we were doing. Nobody is basically hamming anything up. We were actually trying to get the ham level up. I mean, Munro Chambers, who is a veteran actor with 5 years on Degrassi Street two years before this, when he would strike a pose and say some of these lines we were trying to do it right at the edge, with the edge of it being corny. I think he did a fabulous job.

Talking of hamming it all up, the gore was amazingly slapstick but in the best of ways.

Oh absolutely. I don’t know if hammy is maybe the right word. We wanted to be over the top as much as possible to the point of tongue in cheek. Part of this is satire on films that really do go over the top and try to be so fucking serious. Everything that happens in Turbo Kid was not a happy accident, it was all deliberate.

I was joking recently with the three-headed dragon and I said to them, “Now that you’ve had some success (they’re gonna get a couple of other films) if you get 400 thousand dollars you’ll make a 400 thousand dollar film that works or if you get 100 million dollars you’ll make ten 10 million dollar films that work.” With these guys, with every chunk of money comes another voice and another pesonality telling you how to do it and what to do it with. They are very, very smart filmmakers.

I think there are also quite a few political metaphors to be read between the lines in Turbo Kid.

Yeah I talked about that with them over Skype. We certainly talked about the idea of the robotic loving female being a kind of metaphor for sexuality in women and stuff like that. There are some scenes that are perfectly on point.

Absolutely not. It was really interesting. Yoan basically looked after the talent side and François would look after the technical side of things. When they would get into a fight Anouk would step in and balance them out. I don’t know what she said to them in French but they both went away with their tails between their legs. They had their asses slapped.

But they’ve been doing this since they were kids, the brother and sister and the boyfriend, and it’s a really interesting balance. I’ve worked with two directors, The Vicious Brothers on Extraterrestrial, but I’d never worked with three but it really worked. They are all of the same mind and there’s none of that ego factor in any of it. When they say they are grateful for what they are doing it’s true, it really is. They’re small town kids who are getting to do this and they are anything but naive.

I heard that although this is clearly very much a passion project for you, when you first saw it the first 5 minutes took you aback a bit. Why did that happen?

Well I wouldn’t say I was taken aback exactly. The thing was that we thought we were shooting it like a comic book. I remember thinking a couple of times when we were shooting that the coverage didn’t fit with what I assumed we would do. We just didn’t have time. We were shooting as long as we had light, most of it in a quarry pit, with ice and snow and we were all freezing in the mornings and it was really arduous. But yeah, I was really shocked when I saw the cut because it was cut naturally and I thought it was going to be done a lot like a comic book but it works, you know? They’re the storytellers and I’m just a component in there.

Just to finish off can you share any future projects with us at all?

Well I just finished a film called The Space Between which is a comedy picture and I’m going to run off and do The Flash for one of the Networks in British Columbia. Then I’m off to Estonia to play General George MacArthur in a mini-series on the Japanese war crime trials.This is a Japanese/American/French co-production and we are using the courthouses in Lithuania because they were built by the same architect that built the ones in Japan, which they evidently tore down in the ’50s. That’s going to be really interesting.

Thank you so much for your time, Michael.

My pleasure. Oh my God, I’m looking at myself on somebody’s T-shirt right now! Thank you too, Howard.

We’d like to thank Michael for talking to SCREAM and we can’t urge you enough to catch Turbo Kid  when it screens this Thursday, August 27th at Film4 FrightFest. The film also gets a limited theatrical release and hits VOD in the US this Friday with the DVD/Blu-ray releasing in the UK on the 5th of October.