With a new 4K restoration of Wes Craven’s cult cannibal classic The Hills Have Eyes soon to be released on Blu-ray and DVD, Scream caught up with one of its original cast members, the legendary Michael Berryman. Berryman, who played wily clan member Pluto in the movie, mulled over his memories of the production, what it was like working with Wes Craven, and gave us some non-cannibalistic culinary tips on cooking classic British cuisines. 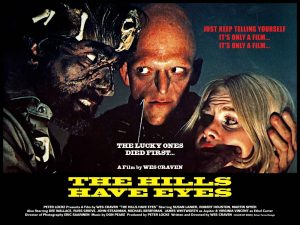 SCREAM: The Hills Have Eyes is nearly forty years old: how does it feel looking back to the film and it’s production after so much time?

Michael Berryman: I’m very pleased. I was in Burbank at a convention over the weekend for the fortieth anniversary which brought back memories. It was a wonderful panel. The other cast members were there: Janus Blythe, Susan Lanier, Don Peake our composer and Martin Speer. We were all super happy and all told stories.

SCREAM: What was it like shooting in the desert for five months?

Michael Berryman: It was very hot in the day and cold at night. We were all much younger back then, roughing it out with hardly any amenities apart from this one little motor home with a wardrobe room, make-up room, production office and all of that. I used to live out there in the desert near the mountains where we filmed so I was familiar with that area but most of the actors weren’t and I don’t do sun very well so had to protect myself from heat stroke.

SCREAM: Did you face any other production challenges?

Michael Berryman: There were problems with a rattlesnake we were using for the movie. It was a mojave green: the most venomous of all the rattlesnakes. As deadly as a cobra and the size of your arm. Big snake. Being a local I knew what it was but it had some kind of loop and filling around its jaw so it couldn’t open its mouth all the way. We kept it really cool which made it lethargic but in the heat of the day it warmed up. Then one day, it got out of its little crate during lunch. People were ejecting from their seats, not waiting to find out where it was, just moving, sure as shit. But Janus found it, picked it up, took it back to Wes and casually said “oh here’s you snake.” Everyone was like “holy crap.” That was dangerous but somehow she survived. Another day, it wasn’t moving fast enough so Janus poked it with a stick and it got very angry.

SCREAM: Did you do much research into cannibalism in preparation for the role?

Michael Berryman: Well I was a butcher in college if that helped.

SCREAM: You were a florist too, is that right?

Michael Berryman: I was a bramble cutter. The bracelet on my wrist in the film was made with real human teeth. All of the jewellery and the necklace that I wore were designed by a lady who did all of our wardrobe and she was getting her master’s degree from UCLA in cultural anthropology. The teeth were given to her by a dentist friend which was cool. I also made a point of making Pluto, my character, quite cunning. When he’s ransacking the trailer, I made sure to leave the soda can and apple but take the hatchet, ammunition and things that he would actually use.

SCREAM: What was it like working with Wes Craven?

Michael Berryman: It was a total joy. He was a very calm and lovely gentleman. Very intelligent. He was a Professor at one time (of Humanities at Clarkson College of Technology). I remember at the first production meeting, him telling me about both his and the film’s back-story and how that all came about. He knew how to structure a good story but he was also a good listener. A good general, so to speak. Never raised his voice. He was just a wonderful guy. I went on to work with him again on Deadly Blessing and The Hills Have Eyes Part 2.

SCREAM: The Hills Have Eyes is still harrowing today, after forty years. Do you think it is excessively violent or did it was it down to Wes Craven’s skill as a director that made it just seem that way? 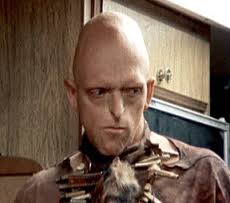 Michael Berryman: I don’t think it’s excessively violent. Apart from that bit where the grandfather is set on fire. But the part that surprisingly hits me hardest is when the main father with the moustache is killing. That was really intense and it’s all down to Wes’ direction. He could create tension really well. In the 70s, at the time, there were all these, not necessarily grindhouse movies, but taboo films like The Last House on the Left which, personally I didn’t really care for. Then over in the UK, where films can be a little more racy, The Hills Have Eyes was rated X. In the states it was rated R, I think.In England you could see boobs but in America that was considered bad. It’s funny how the different ratings systems work and the differences between our cultures. When we were looking at the advertising for The Hills Have Eyes, there were different posters and one where I was holding this woman with a lovely dress and I thought “I don’t remember that moment!”. They couldn’t have Photoshopped it in at the time but I think it was more of an artist’s rendition.

SCREAM: Were you aware that what you were making would turn into such a cult classic?

Michael Berryman: No, not at all. We didn’t think it would go anywhere. I’m very pleased it has had such a strong following. Even with all the remakes, there’s still nothing better than the original.

SCREAM: You’ve done so many films over the years. Are there any kind of roles you would like to play that you haven’t been offered yet or seen captured in a screenplay?

Michael Berryman: I would like to play the part of an odd gentleman who lives on the edge of town. He cares for injured animals, releases them back in the wild. That kind of thing. And then it turns into a love story of some kind. That would be nice. Seeing a guy like that become a hero.

SCREAM: You have Death House coming up too which is highly anticipated.

Michael Berryman: Yes. Everyone’s in that. I was trying to help Doug Bradley come on board but he wasn’t available. I’ve also written various treatments for projects and have other movies in the pipeline. Ten years ago I made a movie with Sean Patrick Flanery and Dina Meyer called The Storyteller. It was director Andrew Getty’s only film, he passed away last year, and is beautiful. We have a screening at the Idaho film festival next month and it’s getting ready to be distributed. It’s based on a nightmare that Andrew Getty had about a man who gets given the gift of a mirror. You know if you have two mirrors facing each other and you can see infinity? So through the mirror he sees this cadaver (played by me) starting to kill his reflections, and it’s getting closer and closer. Andrew figured out a way to film that without using CGI, just practical effects involving planes over other planes and it’s just amazing. A beautifully crafted film that I have had for ten years and it will probably be released this winter, if not, early spring, on a combination of download/ DVD. I’ll keep everybody posted.

Also, my fear friend Jesse Burks, who’s a surgeon in Arkansas, made a short called One Please, a fifteen minute silent short you can find on the internet where I play the creepy ice cream man who comes to town, and the cost of an ice cream in suburbia is your mother’s finger. The other one airing at the Idaho Film Festival in October that’s being considered for awards is called Cured. It’s black and white, again silent, sort of an homage to Rod Serling, so keep a look out for that, it’s a lot of fun. You can do a lot with a little if you know what you’re doing.

SCREAM: Sounds like a look of great stuff in the pipeline and to catch up on.

Michael Berryman: Yes! And next time I’m across the pond you have to show me where to get a decent breakfast. There was a good English pub in Brigadoon, Massachusetts where I grew up and they did some great fish and chips with, of course, a bowl of peas. Standard right? But I always get my English friends a hard time about their breakfasts. I get the grilled tomatoes and eggs but your bacon needs to be a bit more crispy.

SCREAM: You’ve not had a decent English fry up?

Michael Berryman: No. And I’m sorry but blood pudding and haggis, you don’t have to put that much spice in it. What is all that about?

SCREAM: So human flesh fine but you’ll draw the line at black pudding? 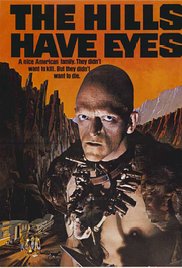 Michael Berryman:(Laughs) Just cook something else. It’s in five star hotels and on cooking channels with gourmet chefs but I look down at the plate and know it’s not right.

SCREAM: I actually have to agree with you on that one. Thank you very much for your time Michael.

Michael Berryman: Thank you! All my best to all the SCREAM readers, I wish you all well. Be safe, be friendly, be fun. Life is too short.

A new 4K restoration of The Hills Have Eyes will be released on Blu-ray and DVD on 3rd October from Arrow Video.