Merci! Among the Living Finally gets a UK Release Date

Julien Maury and Alexandre Bustillo’s slasher flick Among the Living (Aus Yeux des Vivants) has finally been given a release date in the UK courtesy of Metrodome: 7th March 2016. The directing duo are currently working on a prequel to the Texas Chainsaw Massacre – Leatherface, and it was looking as though we’d be receiving that before this.

What sounds like a darker version of Stand by Me, Among The Living follows a couple of kids who stumble upon something they wish they hadn’t. You can check out the trailer below; it’s in French, but it’s easy to get a hold on what’s happening as it relies mainly on visuals, rather than dialogue. It looks like another brutal and gory endeavour with an unmistakable visual flair that is present within their previous horror efforts. 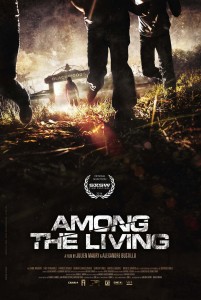 Synopsis:
Youngsters, Victor, Dan and Tom skip school to wander around an abandoned movie set. They stumble upon a horrific vision : a woman in chains is dragged through the field by a man wearing a clown mask. The masked man catches a glimpse of the boys, who scramble to run away. But, before they can escape, they see something which has been hidden for years, something they were not meant to see. Terrified of having been seen by the masked man, the boys try to alert the police. Unfortunately, their past record of unruly behaviour discredits them and the police do not follow up on their tipoff. That night someone breaks into their homes, seeking to eliminate them.

Among the Living stars Inside’s Beatrice Dalle, Chloe Coulloud, Lannick Gautry and Francis Renaud. It will be released on UK DVD on 7th March.