An image has been shared from the action horror Aux and introduces us to the aptly-named creature AUX. It’s hard to see what it looks like as the image is rather dark, but to us, it looks a bit like a lizard-man? It also looks a bit like the Creeper from Jeepers Creepers. Whatever it is, it looks threatening. 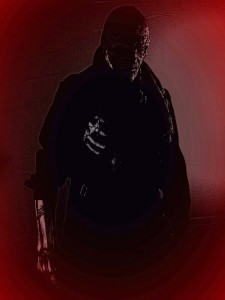 Aux is a gruesome action horror, which begins when two young boys discover the entrance to a secret military bunker that has been undetected since World War II. What they find inside terrifies them so much that one boy doesn’t make it out of the bunker and the other flees for his life only to be hit by a car.  A police investigation is initiated, but one by one the police and forensic officers are killed in grotesque and mysterious ways. Meanwhile in a local nursing home, Jack, a WWII veteran, sees these events unfolding on the news and thinks he knows what is going on…

They do say that curiosity killed the cat and far too often does curiosity kill in horror films; especially children who go looking for adventure. When will they learn? World War 2’s past continues to seep its way in to the present as film-makers love to imagine what other dark secrets the Nazis were hiding and, in this case, it appears to be one monstrous creation, indeed.

Aux comes from first-time director John Adams and stars John Rhys-Davies, Rosie Fellner, Jack Derges, Daniel Eghan and Tristam Summers. The film is currently filming and there is no release date slated as of yet.