At the end of last year, we reported that Rob Lowe was directing a remake of the Oscar-nominated horror-thriller The Bad Seed and now we know who’s going to play the young killer; McKenna Grace (pictured right). 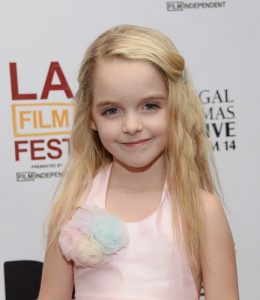 Grace will play the role of Emma, the evil child who was previously played by Patty McCormack in the 1985 version of the film. She was nominated for the Academy Award for a Supporting Actress in her portrayal, so Grace will have figuratively large boots to fill.

Grace has previously starred in Amityville: The Awakening and has a role in the Oscar-nominated I,Tonya with Margot Robbie.

In Lowe’s new re-imagining, it will be a father – played by Lowe – who discovers that his daughter is a murderer. This deviates the film from the ’56 film, its 1985 remake directed by Paul Wendkos, the novel and the play that followed it; all that had a mother dealing with the bad seed.

Wish Upon’s Barbara Marshall will be writing the script, adapting the novel written by William March.