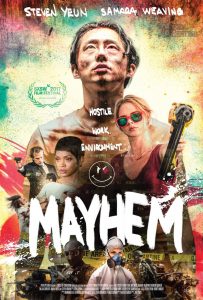 We’ve been led to expect violent and bloody things from Joe Lynch’s Mayhem, and the filmmakers’ decision with regards to a release seems to very much confirm this. While the film was originally granted an R rating from the MPAA for “bloody violence, pervasive language, some sexuality/nudity and drug use,” it seems an even bloodier cut will meet audiences, with the filmmakers bypassing the ratings board to release Mayhem unrated. And kudos to them, as the decision will mean a drastically reduced release.

Mayhem stars The Walking Dead’s Steven Yeun as attorney Derek Cho, who is framed by a co-worker and wrongfully fired on the same day that an airborne virus breaks out in his corporate law office. Trapped in the quarantined building, he must fight not only for his job but for his life. Ash Vs. Evil Dead’s Samara Weaving co-stars, alongside Steven Brand (Hellraiser: Revelations) and Caroline Chikezie (Everly).

Wrong Turn 2: Dead End helmer Joe Lynch directed Mayhem from a script by award-winning screenwriter Matias Caruso. It was shot last year in Belgrade, Serbia, and had its world premiere at this year’s SXSW Festival.

Mayhem will be in selected US cinemas and on VOD and digital HD from November 10th, through RLJE Films.