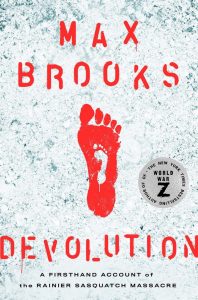 Max Brooks (World War Z: An Oral History of the Zombie War) is back with another horror novel, this one centring around the infamous cryptid Bigfoot. The book is titled Devolution: A Firsthand Account of the Rainier Sasquatch Massacre and is described as part survival narrative, part bloody horror tale, and part scientific journey into the boundaries between truth and fiction.

Following the eruption of Mount Rainier, the journals of Kate Holland are recovered from the wreckage, shining a light on the harrowing Greenloop massacre that had previously gone unnoticed. Her words are contrasted with Brooks’ own investigations into what happened. But if what Kate writes is true, then a terrifying creature walks among us.

Devolution will be released into the wild on May 12th, 2020.