Matt Gilgenbach’s horror game Neverending Nightmares was a crowdfunding success back in 2014 when it managed to raise over $100,000. However, his next psychological endeavour Devastated Dreams was not the hit he hoped, despite securing a modest $32,253 on Kickstarter last year. Along with Infinitap Games, Gilgenbach is going back to Neverending Nightmares by preparing to bring the game to PS4 and PS Vita on 3rd May in the USA and 4th May in Europe. 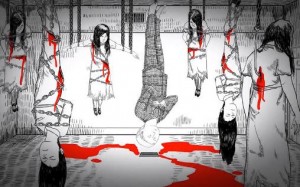 Gilgenbach channels his own struggles with depression and OCD to bring his beautiful, haunting games to life. Despite claiming the game is not biographical, the creator does admit that the feelings felt by the protagonist are familiar to him. He says, “Everything in the game was designed to recreate the feelings and thoughts I experienced at my darkest point in my mental health struggles.”

You can check out the trailer for the game’s PS4 and Vita release below; it’s inherently creepy as its design is mostly black and white, with only streaks of blood red splashed throughout. The music is, also, hugely unsettling and when coupled with the intense shadows and dark lighting it emphasises the game’s nightmarish tone and uneasy atmosphere.