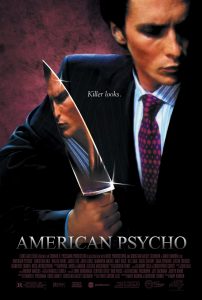 Few serial killer movies have become as deeply ingrained in the public imagination as American Psycho. Two decades later, it’s almost impossible to hear Huey Lewis and the News’ “Hip to Be Square” without thinking of Patrick Bateman (Christian Bale) dancing in his clear plastic raincoat, lecturing Jared Leto’s Paul on the music before sinking an axe in his skull.

To celebrate the 20th anniversary of American Psycho, journalist and programmer Katie Rife caught up with Mary Harron, the film’s director and co-writer, at this year’s Nightstream virtual film festival. If you missed it, never fear, because we’ve compiled some of the most fascinating insights right here.

Before American Psycho, Harron made a name for herself with I Shot Andy Warhol, a biopic that told the story of Valerie Solanas, the radical feminist behind the infamous SCUM Manifesto. The film was well-received, even being nominated for the prestigious Grand Jury Prize at Sundance. But in the wake of its release, Harron found that the only scripts she was being sent felt conventional and safe.

Then she was approached about American Psycho.

Harron had read the original novel, written by Brent Easton Ellis, when it came out. Looking back, she recalls feeling similar to the way she felt when she first read the SCUM Manifesto. She felt that the material was surprisingly funny, something that no one else seemed to be talking about.

“What I loved in Brett Easton Ellis’s portrait was that these guys behaved like the stereotypical version of teenage girls,” she says. “You never see that.”

Despite this initial interest, Harron had a few doubts about the project. For one, she wasn’t even certain if the material was filmable.

“I said, I don’t know if you can make a movie of the book,” she admits, “but if you give me some money to write my own version of the script, I will try.”

Of course, Harron did make it work, along with her co-writer Guinevere Turner. And while some things will always be stripped away when a book is adapted, one aspect Harron she knew she wanted to preserve was the fact that Bateman dedicates whole chapters to talking about his favourite music.

“It’s a wonderful parody of music criticism, in a kind of pompous, Rolling Stone kind of way,” she says. “It was one of my favourite things about the book, because the artists he chose to write about were very kind of middle-of-the-road mainstream. It was Phil Collins, Huey Lewis and the News, and Whitney Houston. As opposed to everything else in the book, he writes about this music with absolute, deep sincerity.”

To incorporate these chapters in the film, Harron and Turner turned them into separate monologues—the first of which is delivered right before Bateman commits his first onscreen kill.

Of course, the jury is still out on whether Bateman actually killed anyone. Harron is comfortable with the ambiguity and doesn’t champion one reading over the others.

“I didn’t write the book,” she says. “People are open to have their own interpretations of it. I don’t believe that my interpretation is the last word, even on the film.”

One thing that Harron cares deeply about, however, is how Bateman is perceived. The film was the subject of a lot of moral panic upon its release, particularly after it was reported that the real-life Canadian serial killer Paul Bernardo kept a copy of the book on his bedside table. Harron found this backlash especially frustrating considering how carefully she’d avoided making Bateman seem cool.

“One of the things that was very important to me… was that Bateman himself was kind of absurd and not a cool guy, not someone you want to emulate,” she says. “He’s ridiculous and pathetic and insecure and a dork.”

Harron was also very deliberate in her portrayal of Christie (Cara Seymour), the prostitute who a naked, laughing Bateman dispatches with a chainsaw—but not before Harron has built up her character and made us fear for her life.

“I felt like, if he’s going to kill somebody, you want to feel for them,” Harron explains. “You want to know them. You want to play those scenes from her perspective. Because otherwise, you’re going to be inevitably sympathizing with the hunter if you don’t really do things from the point of view of the hunted. So it was important to me that those scenes are the only ones that are not from Bateman’s point of view.”

Bateman admits to killing dozens of people. We see only a handful of these kills, real or imagined, on screen. By contrast, your average Marvel film can destroy half of New York City, killing untold numbers of people, and no one bats an eye. For Harron, she reason people found the killing in her film upsetting was that she intentionally made it so.

“It’s supposed to be upsetting,” she says.