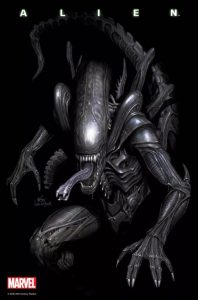 Marvel Comics is unleashing its new Alien comic series on March 24th with the release of ALIEN #1—and you can take a peek inside the pages by watching the trailer below!

Described as a thrilling addition to the incredible legacy that began with the groundbreaking 1979 film, ALIEN #1 is written by Phillip Kennedy Johnson with art by Salvador Larroca. The series features both new and classic characters from Earth and beyond, including Gabriel Cruz who, years ago, gave his life—almost literally—to Weyland-Yutani when he barely survived an alien attack. Recently retired, Cruz is now trying to patch things up with his abandoned son with the help of his friend, a Bishop-model android. But his re-entry into civilian life is not going smoothly… and his encounters with the deadly Xenomorph are far from over.

No one is safe. No one is innocent. And no one can hear you scream.