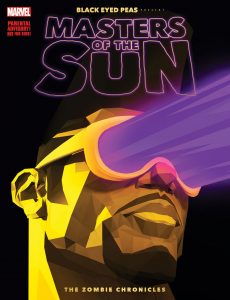 Yes, you read that right. Marvel is to team up with the hip hop-pop group the Black Eyed Peas to bring us a brand new graphic novel titled Masters of the Sun: The Zombie Chronicles. Who knew that BEP loved the undead?!

Synopsis:
Los Angeles is under attack from an ancient alien god sent to earth to turn its inhabitants into zombies. With a deep love of the hip-hop culture, Zulu-X and his crew go head-to-head with a nefarious ancient order to settle a score thousands of years old. What happens next can only be described as the perfect blend of ancient wisdom and street-smarts all rolled into one epic adventure.

The graphic novel has promised to fuse together LA gang culture, B-boy-ism and Egyptology, as well as music, horror and retro futurism. It sounds wonderfully complex and a graphic novel is the perfect platform to explore something that sounds as bizarre and creative as this.

Masters of the Sun: The Zombie Chronicles should be with us sometime this year, so keep your eyes peeled for more!