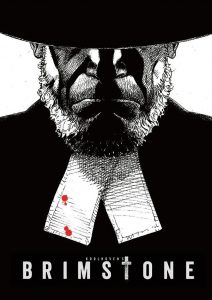 Since debuting at last year’s 73rd Venice International Film Festival, Dutch writer/director Martin Koolhoven’s raw and controversial spin on the western genre, Brimstone, has been shaking audiences around the world to their absolute cores.

Told in four chapters, Brimstone relates the harrowing tale of Liz (Dakota Fanning), a frontier woman turned fugitive who is forced to unrelentlessly protect everyone and everything she stands for when a new reverend climbs the local pulpit.

With the film all set to release this March 10, SCREAM caught up with Koolhoven to discuss saddling up for his first English-language film and the provenance of such a daring and salient premise…

SCREAM: Why, after a hiatus of eight years, did you feel the time was right to tackle an English-language film and why in this particular realm?

Martin Koolhoven: I had received various scripts from America and the UK but there just wasn’t anything that I really liked so that put the seed in me to think about doing something in English. I’ve always been a big fan of Westerns and I thought that if I was going to shoot a film in genre then now was probably the best time to do that and get it financed. And that was before this new western wave that we’ve got going on now had happened.

Basically, it was completely opportunistic. I love the genre and I started to think about what could happen with it if I wrote something that was personal but within that genre.

SCREAM: I know you had a religious upbringing. How much of your own background would you say inspired the premise?

MK: I came from a Protestant environment and I definitely used that. Of course, that was nowhere near as strict as what we see in the movie. My idea was that, if I was going to tackle what is probably the most American genre that there is, and something that is part of the DNA of the country, I wanted to have one foot in that culture but the other foot in my own culture which is, of course, Holland. So I decided to use the Calvinistic belief and the fact that Dutch settlers did move over there to approach the western in that way.

SCREAM: Dakota Fanning came in very last minute but everything played in your favour as, unbeknownst to you, one aspect of her education had found her specialising in the portrayal of women and culture in film. I imagine she brought so much more than you could have expected to her role given her interest and knowledge in the subject matter.

MK: It’s funny because I didn’t even find that fact out until after production. We did talk about how the lead was a woman and how special that was within this specific genre. Also, I don’t think we literally ever called it a feminist film. That came later when other people started calling it that. We saw Dakota’s character basically as a girl who has so much thrown at her that she became a victim but her strength and her will is so strong that she keeps on going and fighting against it. And that’s what Dakota said that she found most interesting about the character. It wasn’t until later that I found out that that’s what she had studied and it all made complete sense to me but for some reason she never mentioned it to me.

SCREAM: Was it always your intention for Dakota’s character to not be able to speak for much of the film? Was it based on something you came across when researching?

MK: With these kinds of things, it’s actually quite difficult to be honest as to where ideas come from. The first idea I had was this idea of a woman without a tongue and the premise for the film basically revolved around how she had lost her tongue. I don’t know why I got that idea but I just thought there was something meaningful about setting a woman who can’t talk within the world in the film. Also, at some point in the movie, a female character gets what they call a scold’s bridal which is an iron mask applied on the head.

SCREAM: That was something I wanted to ask you. Was that torture device something that actually existed?

MK: That is a real thing. I read about it in a book where it had been used by a Dutch character, although I later discovered that it originally came from England. But in the book I first read about this device, it was a Dutch person who used it on his wife and it was something to literally make her shut up.

As I was saying, I never set out to make a feminist film but there were all these ideas that were in Brimstone and when they now call it a feminist film, I’m at absolute peace with that. I’m fine with that because it’s clear that that topic and the role of religion in all of that must have been something that was playing on my mind whilst I was writing. 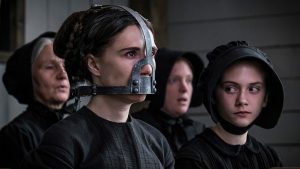 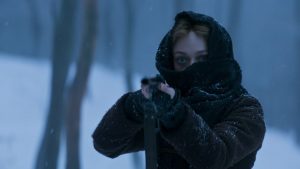 And a lot of people also ask me if I was aware of the social relevance of the film now when I was writing it. My answer was that I had written this Reverend character who justifies all these violent and sexual acts by finding excuses in the Bible and of course I realised that that is something that is very relevant today. The only thing is that you can’t dwell too much on things like that because if you start thinking too much about your film in terms of allegory then you veer too far away from the psychology of the film you’re making. I think you must devote more importance on the characters and the story. Having said that, it did feel good that it had relevance in the now because I always feel that if you do a historical movie it still has to have relevance in today’s world. Why else would you make it?

SCREAM: Guy Pearce never fails to deliver and he really digs his teeth into the role of The Reverend. This character is about as dark and diabolical as they get. How did Guy approach tackling such ignoble terrain?

MK: There’s a lot to say about that. I wanted Guy from the very beginning as I’ve always been a big fan. I sent the script to his agent who read it and he was 100% certain that Guy would be interested in Brimstone because he knew that he loved dark things and this was darker than pretty much anything he had ever done. It turned out that Guy really, really loved the script and the character and, as you quite rightly put it, he dived right into it. He completely transformed himself and learned the Dutch accent and everything. The Dutch accent was all him too. I don’t know why I hadn’t thought about it and Guy said to me, “Of course he has to have a Dutch accent.”

Another thing that both he and Dakota have talked about often is that there is this myth about method acting and how much people have to go into character and end up taking home all this psychological baggage with them at the end of the day. I don’t think that Guy would be able to do what he does if he didn’t know where his off switch was. As a matter of fact, and this is something that I never normally bring up myself but I will in this discussion, Guy fell in love with Carice van Houten on this movie and he absolutely abuses her character in this movie. The fact that these two people fell in love already shows you how separate real life and acting really are, as they should be. Guy has a very healthy relationship with his work. He puts in all the work required but never forgets that it’s all just acting. It’s only when he flicks on the switch that he goes into that state of mind. And God bless him for doing a strange European movie like this. Ultimately, it’s a European production and he was there in Spain, Austria, Hungary and Germany on a set with everyone talking in Dutch to each other while he was playing a completely evil lunatic. It takes a very particular kind of guy to be up to that kind of challenge and I’m very grateful to Guy for that. 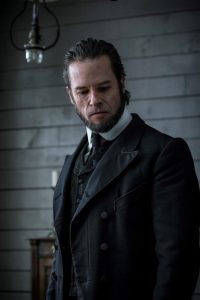 SCREAM: Just to finish off, I must ask you about Guy’s appearance in the film. Who decided on his look? I’ve read it described as a cross between a demonic Abraham Lincoln and Robert Mitchum in Night of the Hunter?

MK: What happened was I had a great Dutch graphic novel artist. I’d given him the script and he drew up some artwork and posters before Guy was even involved and the pictures just happened to feature that beard. I had tonnes of stuff in what was like a Bible that I used for reference for the movie and there were some drawings in there. When Guy signed up to play the part, I sent him all this stuff and then months before he was going to shoot he just sent over photos of himself with that beard and asked me what I thought. So that was kind of his own idea in a way too. I couldn’t have asked for a better man for the job.

We’d like to thank Martin for speaking with SCREAM and we urge you to catch Brimstone when it releases from March 10.