MARK OF THE WITCH: Film Review 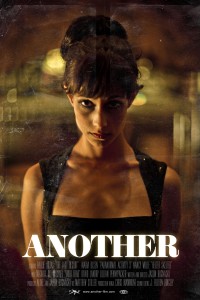 Synopsis:
A young woman called Jordyn (Pauline Redding) learns that she may be the spawn of Satan and becomes embroiled in a world filled with possession and desire as she learns her role in ensuring her family’s curse continues.

Mark of the Witch (aka: Another) has undoubtedly been influenced by the films of Dario Argento and, perhaps, Gaspar Noe as it heavily relies on highly stylised cinematography and slow-motion. Couple this with a consistent thread of operatic music and erotic imagery and the homage to giallo films is, more or less, complete. Sadly for Mark of the Witch, the film’s intention to honour Italian thrillers is lost in its level of incoherency and generally nonsensical narrative. This film is a classic case of style over substance, and although it is very beautiful to look at, its refusal to pay attention to any other aspects of film-making prevents it from being the arty and complex feature it so desires to be.

Rather than being a film with a typical beginning, middle and end, Mark of the Witch is a series of scenes and images that, at times, bear no relevance to the plot – not that I can tell, anyway. The film does not flow and suffers from its harsh, choppy editing, making it even more difficult to follow. The story is already extremely weak, with very little care taken to style a sold, interesting tale, but then the film tries to persuade us that it’s a work of art. No amount of thoughtful slow-motion, poignant music and striking lighting can divert our attention from the simple fact that this is not a good film. 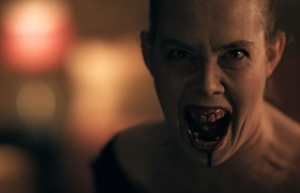 Reviews are purely one person’s opinion and I am certain that there are people out there, reading this and thinking, “This sounds exactly like my cup of tea” and you’re probably right. There are probably a whole heap of you who applaud films that choose to favour technical achievement over plot development, characterisation and a general attempt to present something a tiny bit logical. If this sounds like you; then check this one out, because it’s got a complete disregard for logic and its pretentious direction makes it a chore to finish.

Classing Mark of the Witch as a horror film is quite generous and it only manages to secure this status on the most basic level. Much as its appreciation for story creation, its concern with setting-up scares and providing chills is entirely lost in its preoccupation with securing its alluring quality. There are a handful of ‘scary’ moments; one that is truly terrible and hindered by some appalling CGI and others that fail to be anything to fear. This is a shame, because the opening scene of the film had a hint of promise as it conveyed an ominous atmosphere filled with unease, setting the film up to be eerie and genuinely creepy. However, this is soon swallowed up by the film’s pretensions and abandoned alongside any other moments that could suggest potential.

For a film that is only 80 minutes long, Mark of the Witch likes to waste its short run-time. If the film maintained a normal speed it would barely hit the hour mark. I enjoy a bit of slow-motion horror as much as the next horror fan, but when the majority of the film is shot in this way it becomes frustrating and any ounce of slow-mo meaning is quickly lost. Rather than focusing so intently on producing something so visually pleasing, it would have been beneficial for Mark of the Witch to, at least, pretend it is slightly concerned with storytelling and not just the way the film looks. If there was ever a time to describe a film as “vain” than this is it.

Another problem that seeps through the cracks of this beautifully exhausting bore-fest is the cast; the leading lady in particular. Pauline Redding is another gorgeous piece of this perplexing puzzle, but that’s as far as the compliments can go. Her kohl-lined and always widened eyes are stunning, but her acting skills are poor. She appears to stumble on almost every line that she delivers and further emphasises this film’s narrow-minded decision to disregard much of what makes a film truly great. Perhaps with a better script there would have been more for this actress to get her teeth in to, but unfortunately, this film does not showcase her abilities if they are there.

All in all, we’re left with a very tiresome and frustrating film here; even the credits roll at a painfully slow pace. Mark of the Witch is pretty but hollow, little horror that boasts seldom more than impressive work in post-production.