Marilyn Manson’s latest album, Heaven Upside Down, has gone a long way towards making the onetime Antichrist Superstar someway relevant again, with the best music he’s made in years, as well as a string of horrorlicious videos. On Sunday, the God of Fuck tweeted an exciting tease for his next filmed project, announcing that he will be working with Amer directors Hélène Cattet and Bruno Forzani.

“I had the pleasure of Belgium and meeting my favorite directors. Helene Cattet & Bruno Forzani. AMER & more,” Manson wrote, adding, “I can’t wait to start working with them.” 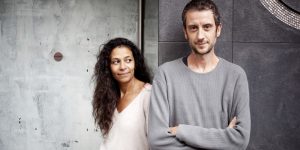 Although Manson has not explicitly stated, it is assumed the Cattet and Forzani collaboration will be his next music video. The French filmmaking couple were lauded with well deserved acclaim for 2009’s stunning giallo-inspired arthouse nightmare Amer and follow-up The Strange Color of Your Body’s Tears, and have scored another festival hit this year with Let the Corpses Tan! (original title: Laissez Bronzer les Cadavres!).

Manson is currently preparing to head out on the next leg of his delayed tour.