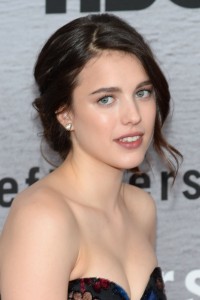 Warner Bros have cast Margaret Qualley in the lead role of Death Note, the adaptation of the 13-volume Japanese manga series, to be directed by Adam Wingard. You may recognise Qualley from the TV series The Leftovers where she plays Jill Garvey or from the coming-of-age-drama Palo Alto. She joins Nat Wolff (Paper Towns) who will be the leading male.

Death Note has been described as a supernatural thriller and the synopsis of the manga series is as follows:

Synopsis:
Light Yagami is a genius high school student who is about to learn about life through a book of death. When a bored shinigami, a God of Death, named Ryuk drops a black notepad called a Death Note, Light receives power over life and death with the stroke of a pen. Determined to use this dark gift for the best, Light sets out to rid the world of evil… namely the people he believes to be evil. Should anyone hold such power? The consequences of Light’s actions will set the world ablaze.

Adam Wingard has dabbled in a variety of horror-thrillers from A Horrible Way to Die, to You’re Next and, most recently, The Guest. He’s certainly made a huge name for himself in the cult genre world and was even tipped to direct Furious 8 before F. Gary Gray (Straight Outta Compton) nabbed it. We’re always excited to hear what Wingard is doing next and an adaptation of a supernatural and psychological manga series which explores the concepts of good and evil sounds more than delightful.