I was fascinated when I found out about the subject matter of this book. The horror movies of the seventies were a staple of my formative years and fuelled the passion for horror that I hold so dear. The slew of remakes of seventies and eighties horror have often caused me to groan. The book is certainly not a shallow attack on remakes but a legitimate examination. David Roche looks at the similarities and differences in themes and wider meanings drawn from the films. Horror films are in many cases a reflection of the issues of the day, and although some problems remain from the seventies to today, others have changed what with societal changes and different audiences and all.

I should point out that this is an academic text, rather than one of the more casual horror movie non-fiction books you can pick up. It is heavily footnoted with reference to articles and critics’ discussions. For me, this made me seek out the original articles as I wanted to know more. It is incredibly in-depth. Themes that are key areas of the book include race, class, family, sexuality and gender. Whether a film is considered good or bad is a somewhat subjective discussion, so Roche used criteria to compare and contrast the original with the remake beyond that. The main question Roche is seeking to answer is: Are the movies of the seventies more disturbing than the remakes? The analysis is based on criteria including economic success, technique, what the films tell us about about the period or genre, emotion (fear), and originality.

Although other films that were remade in the 2000s are given mention in the book, the focus is on The Texas Chainsaw Massacre (1974 & 2003), The Hills Have Eyes (1977 & 2006), Dawn of the Dead (1978 & 2004), and Halloween (1978 & 2007). There is much to discover about these titles with the viewpoints of a variety of critics along with quotes from creators and producers of the films. Personally, I found the discussion of The Hills Have Eyes the most interesting, although I’ll admit that Halloween is my favorite of the films he talks about. 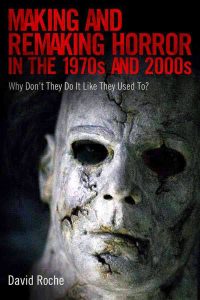 Thanks to this book, I have a greater appreciation of the meanings and subtexts of the films, including the remakes. It brought up aspects of the films I’d never picked up on despite many viewings of the originals. I don’t agree with every conclusion Roche reaches but that’s ok; that’s the beauty of discussing horror films. I’m now going to re-watch the originals and the remakes and look at them in a new light. It’s not light reading; it’s for students and dedicated fans of the genre. Are the originals more disturbing than the remakes? Most horror fans are quick to dismiss the remakes. That’s up to you, but reading this thought-provoking book will make you consider it more carefully.