Make a Date with Stake Land II on Valentine’s Day

Stake Land II: The Stakelander is gearing up for a release date in February, with the film being released on digital platforms on 7th February and on DVD and Blu-ray on 14th February. This means if you haven’t got a date for Valentine’s Day 2017 yet, then screw it, Stake Land II has got your back. 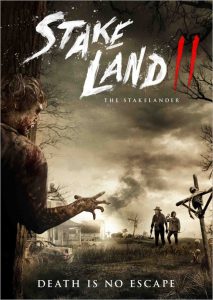 Stake Land was not a film we were expecting to receive a sequel, but if the film industry has taught me anything, it is to expect the unexpected. Nick Damici has returned to write the script for the film and is also reprising his role of Mister. Connor Paolo is also returning as Martin, who now finds himself alone in the Badlands of America after the destruction of New Eden.

Jim Mickle may not be directing the film, but he will be on-board as an executive producer. Dan Berk and Robert Olsen are in the director’s chair this time and they were behind 2015’s entertaining horror-thriller Body with Helen Rogers.

Be sure to get your teeth into Stake Land II: The Stakelander in February 2017.