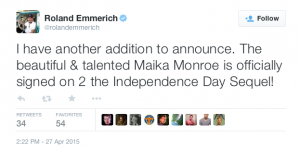 Director Roland Emmerich tweeted the news, although he made it short but sweet. Monroe will play the daughter of the president of the United States, who will be played by Bill Pullman.

Starring in this story of extraterrestrial redemption is Liam Hemsworth (The Hunger Games), Charlotte Gainsbourg (Anti-Christ) and Jessie Usher (When The Game Stands Tall) whilst Jeff Goldblum (Jurassic Park) and Judd Hirsch (Ordinary People) will reprise their original roles from the 1996 film Independence Day.

The film will be released in summer 2016.

Synopsis:
Twenty years after the Earth was attacked by a swarm of aliens, the rest of their population come looking for redemption after receiving a distress call that was sent out by the first outer space creatures.